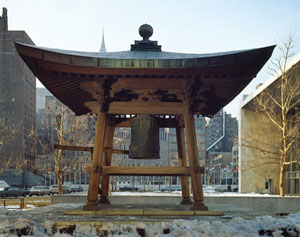 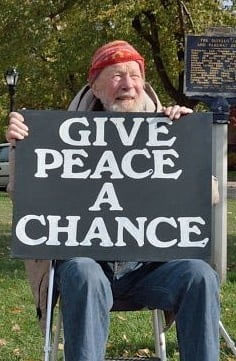 Opening performance by the musical goodwill ambassadors Tarumi Violinists, under

the direction of Yukako Tarumi, accompanied by accordionist Guillermo Vaisman,

who have performed for UN Secretary-General Ban ki-Moon, His Holiness Pope

John Paul II, Queen Silvia of Sweden, and US President Bill Clinton at the White House.

anniversary of the birth of the third UN Secretary-General U Thant, the first UN

– Message from John McConnell, founder of Earth Day on the Spring Equinox

supported by the world renowned anthropologist Margaret Mead. At the moment of

the Equinox, night and day are equal all over the world.

Have All The Flowers Gone?” in a tribute to Pete Seeger.. Her rendition of”Autumn

Leaves” celebrates the Autumnal Equinox in the Southern Hemisphere, the free-spirited

– The Tarumi Violinists will gather around the UN Peace Bell, together with other children from at the

Whitby School in Greenwich, Connecticut for the bell ringing ceremony with Pete Seeger to take place at exactly 7:44 AM EDT. At the moment of the Spring Equinox, the bell will be rung three times, followed by a “Minute for Peace.” This is a moment for silent prayer meditation, or reflection..

Following the ceremony, Pete Seeger, the legendary folk musician, who performed at the inauguration of US President Barack Obama, will play “If I Had A Hammer” with singing by the children of the Whitby School in Greenwich, Connecticut and audience members.

WATER IS ESSENTIAL FOR LIFE. Water is crucial for sustainable development, including the preservation of our natural environment and the alleviation of poverty and hunger. Water is indispensable for human health and well-being.

The United Nations General Assembly, in December 2003, proclaimed the years 2005 to 2015 as the International Decade for Action ‘Water for Life’.

A decade of action! The primary goal of the ‘Water for Life’ Decade is to promote efforts to fulfill international commitments made on water and water-related issues by 2015.

These commitments include the Millennium Development Goals to reduce by half the proportion of people without access to safe drinking water by 2015 and to stop unsustainable exploitation of water resources. At the World Summit in Johannesburg in 2002, two other goals were adopted: to aim to develop integrated water resource management and water efficiency plans by 2005 and to halve, by 2015, the proportion of people who do not have access to basic sanitation.

A major effort is required in this decade to fulfil these commitments and extend access to these essential services to those who remain unserved, the majority of whom are poor people.

As women play a central role in water provision and management, a special emphasis will be placed on ensuring the participation and involvement of women in these development efforts.

Among the themes that are central for the ‘Water for Life’ Decade are: scarcity, access to sanitation and health, water and gender, capacity-building, financing, valuation, Integrated Water Resources Management, trans-boundary water issues, environment and biodiversity, disaster prevention, food and agriculture, pollution and energy.

UN-Water is coordinating the ‘Water for Life’ Decade, 2005-2015. UN-Water is the United Nations inter-agency mechanism of all relevant agencies, departments and programmes involved with water-related issues.

The granddaughter of the legendary Jacques Cousteau marks

World Water Day with an around-the-world expedition to

Water is life itself. So says Alexandra Cousteau, whose family name is synonymous with the care and preservation of our environment and resources. Alexandra is leading Expedition: Blue Planet, an unprecedented 100-day trip with the goal of helping all of us get engaged in taking positive action on this vital issue.

Throughout the expedition to five continents, Alexandra will engage with people around the world through video, blogging and chat sessions. Live from a stop in Istanbul, Alexandra will talk with you about

How we are all interconnected by water issues
The connection between climate change and water
Stops she has made so far on the expedition, and what lies ahead
What people can do to make a positive difference in their communities