THE WOMEN’S FORUM OF NEW YORK

You are here: Home / Good News To Go / THE WOMEN’S FORUM OF NEW YORK 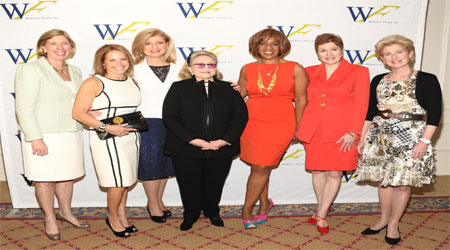 WHAT: The Women’s Forum of New York will present the 2nd Annual Elly Awards Luncheon benefitting The Education Fund of The Women’s Forum on Friday, May 18 at The Plaza Hotel in New York City. The awards, named for The Women’s Forum founder Elinor Guggenheimer, will honor outstanding women leaders. Arianna Huffington & Barbaralee Diamonstein-Spielvogel will be the honorees.

Press Check in is 11:00 a.m. RSVP is required as space for press is limited.

WHERE: The Plaza Hotel in New York City.

WHO: CONFIRMED CELEBRITIES & VIPS ATTENDING THE ELLY AWARDS INCLUDE:

The Elly Award Recipients (both in attendance)::

Participating Celebrities: (all confirmed to attend):

•             Gayle King, Emmy® Award winning journalist, will lead a conversation with the honorees following the presentation of the awards.

•             Muriel Siebert, The first woman to hold a seat on the New York Stock Exchange. Legendary Chair, The Elly Awards.

The Women’s Forum of New York:

The Women’s Forum of New York is New York’s premier organization of women leaders comprised of the highest women achievers across all professional sectors from finance to fine arts.

●             through their Board Initiative which expands and extends the contribution of women leaders through participation on corporate and civic boards.

The Education Fund is an educational and charitable arm of The Women’s Forum of New York, established under a separate corporate governance as a 501(c)3 tax deductible organization.

Since 1987, the Fund has helped mature women pursue educational goals and enhance their capacities to provide productive and supportive service to their communities. The Award recognizes extraordinary and often heroic effort in overcoming adversity and the most daunting of odds in restructuring lives for success.

Grants are awarded to women over the age of 35 who, after suffering great adversity and an interruption in their education, are now pursuing undergraduate college degrees. Students in this population are often single parents, economically disadvantaged and struggling with the rising costs of a college education. Over the past 25 years, 130 women have been honored by The Education Fund.