You are here: Home / All We Need Is Love / Relationships and Self / Thich Nhat Hanh, Monk, Zen Master and Activist, Dies at 95

A monk with global influence and an ally of Martin Luther King, he championed what he called “engaged Buddhism,” applying its principles in pressing for peace. 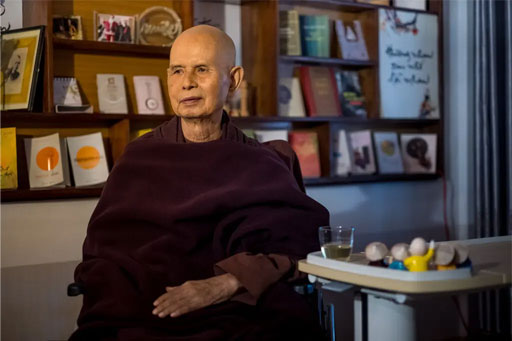 Thich Nhat Hanh in his room at his temple in Vietnam in 2019. He was exiled from his country after opposing the war there in the 1960s. Credit…Linh Pham for The New York Times

Thich Nhat Hanh, a Vietnamese Buddhist monk who was one of the world’s most influential Zen masters, spreading messages of mindfulness, compassion and nonviolence, died on Saturday at his home in the Tu Hieu Temple in Hue, Vietnam. He was 95.

The death was announced by Plum Village, his organization of monasteries. He suffered a severe brain hemorrhage in 2014 that left him unable to speak, though he could communicate through gestures.

A prolific author, poet, teacher and peace activist, Thich Nhat Hanh was exiled from Vietnam after opposing the war in the 1960s and became a leading voice in a movement he called “engaged Buddhism,” the application of Buddhist principles to political and social reform.

Traveling widely on speaking tours in the United States and Europe (he was fluent in English and French), Thich Nhat Hanh (pronounced tik nyaht hahn) was a major influence on Western practices of Buddhism, urging the embrace of mindfulness, which his website describes as “the energy of being aware and awake to the present moment.”

In his book “Peace Is Every Step: The Path of Mindfulness in Everyday Life,” he wrote, “If we are not fully ourselves, truly in the present moment, we miss everything.”

His following grew as he established dozens of monasteries and practice centers around the world. The original Plum Village, near Bordeaux in southwest France, is the largest of his monasteries and receives visits from thousands of people a year.

In 2018, he returned home to Hue, in central Vietnam, to live out his last days at the Tu Hieu Temple, where he had become a novice as a teenager.

Thich Nhat Hanh dismissed the idea of death. “Birth and death are only notions,” he wrote in his book “No Death, No Fear.” “They are not real.”

That understanding, he wrote, can liberate people from fear and allow them to “enjoy life and appreciate it in a new way.” 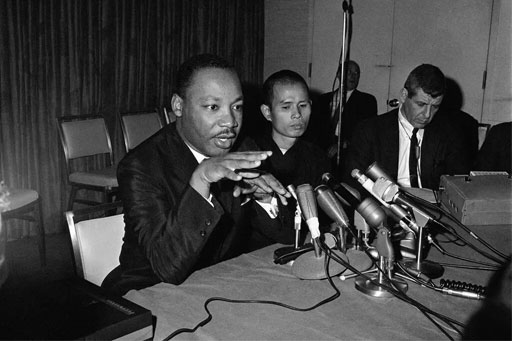 The Rev. Dr. Martin Luther King Jr. with Thich Nhat Hanh at a news conference in Chicago in 1966. Dr. King nominated him for a Nobel Peace Prize the next year.Credit…Edward Kitch/Associated Press
His connection with the United States began in the early 1960s, when he studied at Princeton Theological Seminary in New Jersey and later lectured at Cornell and Columbia. He influenced the American peace movement, urging the Rev. Dr. Martin Luther King Jr. to oppose the Vietnam War.

Dr. King nominated him for the Nobel Peace Prize in 1967, but the prize was not awarded to anyone that year.

“I do not personally know of anyone more worthy than this gentle monk from Vietnam,” Dr. King wrote to the Nobel Institute in Norway. “His ideas for peace, if applied, would build a monument to ecumenism, to world brotherhood, to humanity.”

Thich Nhat Hanh was born Nguyen Xuan Bao in Hue on Oct. 11, 1926. He joined a Zen monastery at 16 and studied Buddhism there as a novice. Upon his ordination in 1949, he assumed the Dharma name Thich Nhat Hanh. Thich is an honorary family name used by Vietnamese monks and nuns. To his followers he was known as Thay, or teacher.

In the early 1960s, he founded Youth for Social Services, a grass-roots relief organization in what was then South Vietnam. It rebuilt bombed villages, set up schools, established medical centers and reunited families left homeless by the war.

Thich Nhat Hanh began writing and speaking out against the war and in 1964 published a poem called “Condemnation” in a Buddhist weekly. It reads in part:

Whoever is listening, be my witness:
I cannot accept this war.
I never could I never will.
I must say this a thousand times before I am killed.
I am like the bird who dies for the sake of its mate,
dripping blood from its broken beak and crying out:
“Beware! Turn around and face your real enemies
— ambition, violence hatred and greed.”

The poem earned him the label “antiwar poet,” and he was denounced as a pro-Communist propagandist.

Thich Nhat Hanh took up residence in France when the South Vietnamese government denied him permission to return from abroad after the signing of the Paris Peace Accords in 1973.

He was unable to return to Vietnam until 2005, when the Communist government allowed him to teach, practice and travel throughout the country. His antiwar activism continued, and in a talk in Hanoi in 2008 he said the Iraq war had resulted from fear and misunderstanding in which violence fed on itself.

“We know very well that airplanes, guns and bombs cannot remove wrong perceptions,” he said. “Only loving speech and compassionate listening can help people correct wrong perceptions. But our leaders are not trained in that discipline, and they rely only on the armed forces to remove terrorism.” 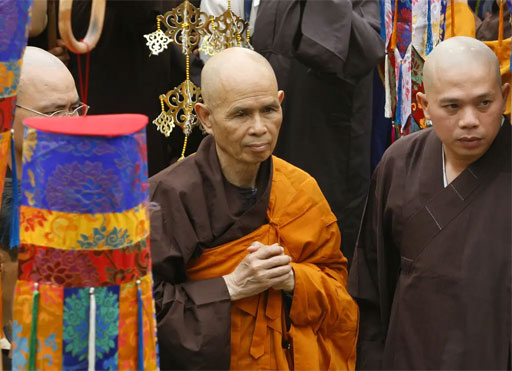 Thich Nhat Hanh during a ceremony in Ho Chi Minh City in 2007. He had lived in exile for decades. Credit…Associated Press
In 2013, on one of his many visits to centers of influence in the West, he spoke at Google’s headquarters in Silicon Valley, bringing his message of quiet contemplation to the forefront of the high-energy digital age.

“We have the feeling that we are overwhelmed by information,” he told the assembled workers. “We don’t need that much information.”

And he said: “Do not try to find the solution with your thinking mind. Nonthinking is the secret of success. And that is why the time when we are not working, that time can be very productive, if we know how to focus on the moment.”