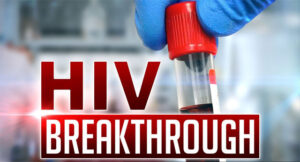 Nuclear fusion saw another major breakthrough… a ‘huge step’ in the quest for clean energy.

A woman was cured of HIV through a breakthrough stem cell treatment.

MIT engineers created an ‘impossible’ new material… stronger than steel but as light as plastic.

An international team of scientists used supercomputers to unlock a ‘giant leap’ in the fight against antibiotic resistance.

A new ‘game-changing’ carbon capture technology could deliver a step change in our ability to remove dioxide from the air.

A ground-breaking new technology regrew a frog’s lost leg… and it might work on humans too.

Surgeons completed the first-ever heart transplant with a genetically-modified animal heart… saving the life of a 57-year-old and taking a big step towards helping solve the global donor organ shortage.

Biodegradable surgical tape has been invented… making some intestinal fixes as easy as ‘duct tape around leaky pipes’.

An autonomous drone carrying a defibrillator saved the life of a 71-year-old having a heart attack… a first in medical history.

Just a few of many incredible achievements in the first 50 days of the year.

The world is far from perfect, but we shouldn’t forget that about 90% of all scientists that ever lived are alive today. Never before have we had so many people whose sole purpose of work is to better understand how the world works.

2022 is shaping up to be a remarkable year in science and technology.