You are here: Home / All We Need Is Love / Children and Parents / Transcendental Meditation impacts an incredible, young autistic man – Joey Lowenstein!!! 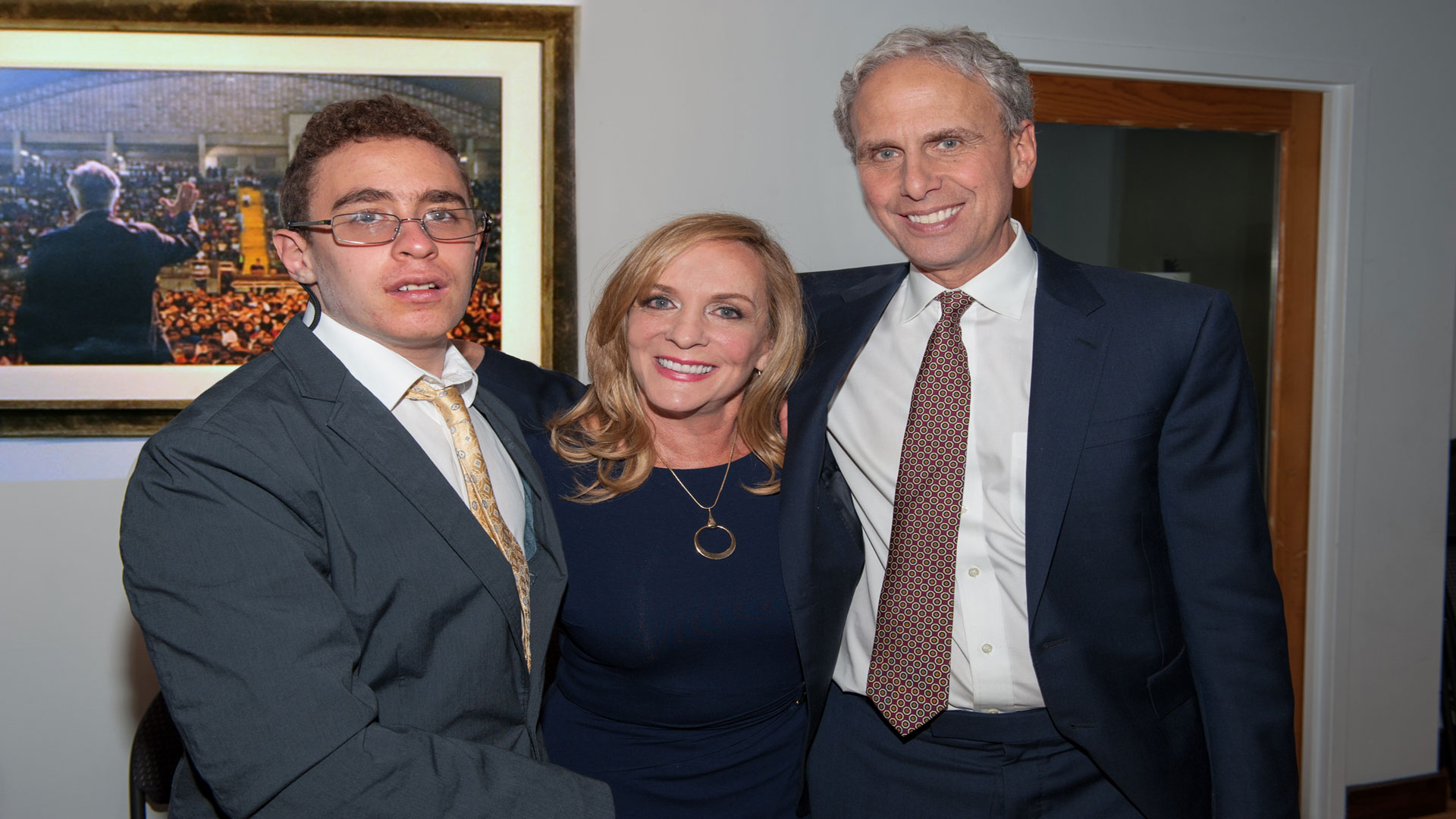 Autism Spectrum Disorders or “ASDs,” are described by the Centers for Disease Control and Prevention as a group of developmental disabilities that can cause “significant social, communication and behavioral challenges.”

Today, Autism Spectrum Disorders are growing at epidemic rates — affecting 1 in 88 individuals and 1 in 54 boys. Many people with ASDs suffer anxiety, sleep disturbances, poor self-regulation, and sensory sensitivities… all of which “significantly” impair daily functioning… and quality of life.
Can a simple, easily-learned, evidence-based meditation technique be an effective tool for reducing the symptoms of Autism Spectrum Disorder (ASD)?

Transcendental Meditation, an evidence-based meditation technique, practiced by more than FIVE million people. It has been found capable of improving  symptoms of ASDs.

People with ASDs “frequently” struggle with transition and changes in routine, and find social interactions… stressful. Friendships tend to be challenging; individuals with ASD commonly struggle to perceive social cues, interpret the social intentions of others, recognize the impact of their “own” actions in social situations… and respond in socially conventional ways.

Reducing stress and anxiety has the potential to “significantly” improve the quality of life of people with ASDs… and their families.  However, current treatment for anxiety and stress is very limited.

Transcendental Meditation is a simple, effortless technique practiced for just 15 to 20 minutes, TWICE a day, by adults, and 10 to 12 minutes TWICE a day by adolescents.  It is practiced by sitting comfortably with your eyes CLOSED.  People of ALL ages and backgrounds (including those with ASD) are able to learn and practice TM.

Why is THIS relevant today?

Because conventional treatment options for ASDs are “limited.” TM has an “excellent” record of success for reducing anxiety and stress, and improving the quality of life for children AND adults with autism.

Roberta Lowenstein is the mother of an extraordinary young man with autism, 17-year-old Joey Lowenstein. She is also the Founder and Chair of the Joey Lowenstein Foundation, a nonprofit which focuses on Athletics, Nutrition, Self-Development,   RPM(RapidPromptingMethod), and Seizure and Brain Research.

Diagnosed with autism at the age of 2 and a half years of age, Joey — and Roberta — have endured much over the years. The most inspiring of which was Joey’s recent conquering of a 14-year virtual silence. Unable to communicate through typical speech (or so was thought), Joey had uttered few words through the age of 14.

However, this changed three and a half years ago when Joey’s mother discovered a method of communicating called Rapid Prompting Method (RPM). RPM is an educational platform that utilizes a letter board to facilitate education and communication. Having tried dozens of therapies over the years nothing could have prepared Roberta for what was coming.

What was previously impossible became possible when Joey began using a letter board to speak. The flood gates of communication opened (and so had Roberta’s tears) releasing 14 years of ‘bottled-up’ expression, thoughts concealed, fears and dreams for the future. Matthew Kennedy, Joey’s mentor and RPM instructor has played an integral role in Joey’s expressing his “voice”.

Although not formally taught, Joey could read. He could perform eighth grade math. He is witty. He can write poetry; possessing a wisdom well beyond his teenage years. His Rabbi describes Joey as ‘an old soul.’

Joey Lowenstein presented his thoughts using RPM in front of an audience at the David Lynch Foundation. It was truly an inspiration to “hear” his thoughts. Here are some excerpts from the dialogue:

Bob Roth (BRoth):  Bob explained Transcendental Meditation, what it is and what it is not.  Seeking your rich Internal world……
Roberta Lowenstein shared the fact that she had learned Transcendental Meditation about three years ago when her dear friend Lorraine Cancro, MSW, Executive Director of the Global Stress Initiative coordinated many of their Scientific and Lay Advisors take the class with Bob Roth.  After continuing meditating Roberta asked Bob if he thought Joey, who was autistic, could learn to meditate? Roberta spoke about the process of Joey learning to sit quietly for 20 minutes twice a day, and that both of Joey’s RPM therapists, (Matthew and Brianne), had learned to meditate with Bob. Roberta related to the audience Joey’s famous  phrase that “TM Calms the Mind and the MOM”

Some excerpts from the enlightening dialogue between Joey and the audience are below:

BRoth:  Joey, how do you feel during meditation and afterwards?

JL:  NOW I HAVE REALLY TO THANK MY MEDITATION TEACHER BOBBY

BRoth:  How do you feel during Meditation?

JL:   DURING MEDITATION I REALLY FALL INTO A SPELL OF QUIETNESS.

BRoth:  How do you feel right after Meditation?

JL:  HOW I FEEL IS TOTALLY RESTORED AND JUST LIKE I CAN HANDLE THE CRAZY WORLD WE JUST LIVE IN.
BRoth:  Why do you think other people will benefit from Meditation?

JL:  YES, IT MOST CERTAINLY REALLY  MORE THAN EXPECTED, WILL REDUCE STRESS IN THE LIVES AND FAMILIES OF THOSE WHO MEDITATE.MOM WILL REALLY TELL YOU THAT BEFORE WE FOUND MEDITATION AND THE LETTER BOARD, I WAS NOT, NOT, NOT SEEN BY OTHERS AS A VERY MATURE AND SMART YOUNG MAN.

The audience shared a few questions and comments below:

Richard Peterson: (Joey’s personal trainer and nutritionist)  I noticed that after TM started that Joey’s ability to concentrate and calm himself showed improvment, and his athletic abilities increased.

Martha Simmons: (Family friend/Reading specialist)  Did you ever have any moments of doubt about RPM or Meditation?  If so what kept you going?

JL:  MATTHEW ALWAYS TELLS ME NOT TO EVER GIVE UP

There was Spontaneous Applause from the audience!

Vinnie Forras:  (someone new to Joey)  Joey your clarity and depth of thinking is so impressive.  It is obvious people around you love you so much.

The audience was truly moved by Joey’s words and the goals of his foundation. Joey’s foundation will have the resources to help people who have autism, in the words of Joey, “Break the Barriers of Autism” and find their own bridge to communicating WHO they are, and WHAT they are capable of doing with their “unique” gifts.

Roberta explained that her relationship with her son, Joey, improved greatly through the regular practice of TM. This shared quiet time or “going within” has helped Joey find  inspiration. Soon after Joey told his mother that he wanted to start a business or foundation to help others like him to find their voice and maximize their potential. He does not want to be limited by his disorder and wants others to know they can “Breaking the Barriers of Autism” too. Clearly, Joey is a remarkable young man.

Bob Roth stated “TM is great for the developing brain and the pre-frontal cortex. TM increases mental flexibility and a willingness to interact with others which leads to a reduction in stress for individual and their family. It helps the autistic individual create a wider world. Two areas of impairment for autistic individuals is their ability to sleep and ability to socialize. These areas improve greatly while practicing TM.”

In the words of Joey Lowenstein, “TM helps you find tranquility within. Stay cool and you can take the heat.”

If you are interested in learning more about Transcendental Meditation and how IT can be used to help you or a family member – or your clients – with Autism Spectrum Disorder, please write to: