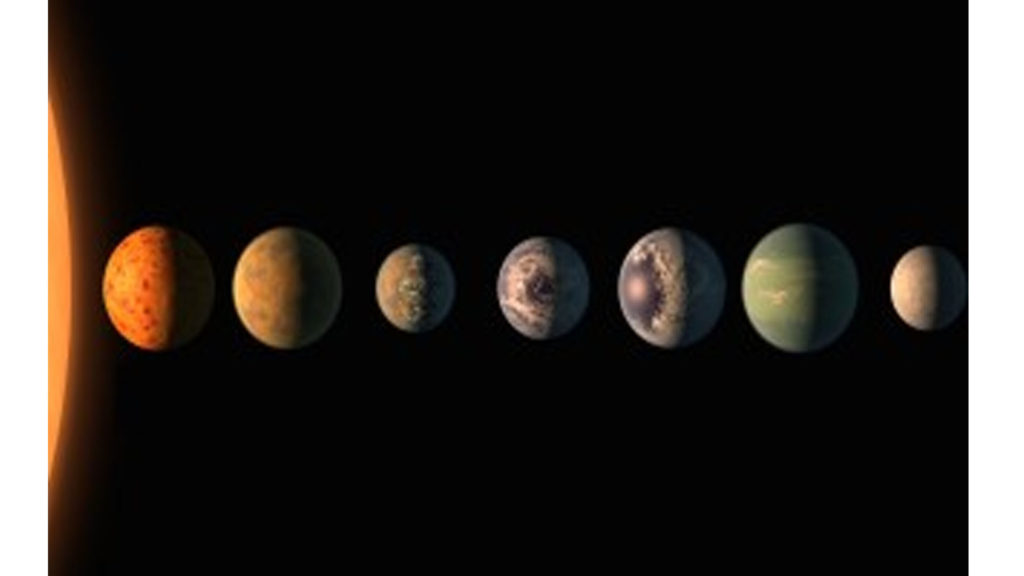 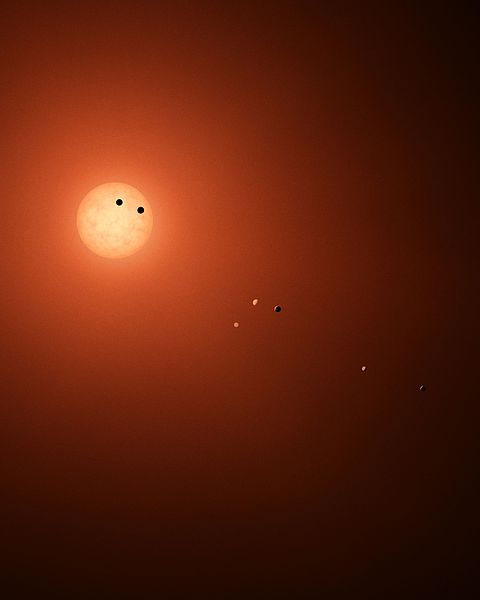 TRAPPIST-1, also designated as 2MASS J23062928-0502285, is an ultra-cool dwarf star located 39.5 light-years (12.1 parsecs) from the Sun in the constellation Aquarius. It is as of February 2017 unique in light of its seven detected roughly Earth-sized planets.

In 2015, astronomers discovered three Earth-sized planets orbiting the dwarf star. A team led by Michaël Gillon at the University of Liège in Belgium detected the planets using transit photometry with the Transiting Planets and Planetesimals Small Telescope (TRAPPIST) at the La Silla Observatory in Chile. On 22 February 2017, astronomers announced four additional exoplanets around TRAPPIST-1. Besides TRAPPIST, this work utilized the Very Large Telescope at Paranal and the NASA Spitzer Space Telescope, among others, and brought the total number of planets to seven, of which three are considered to be in its habitable zone. The others could also conceivably be habitable (possess liquid water somewhere on their surface).

A light-year is a unit of length used to express astronomical distances. It is about 9 trillion kilometres or 6 trillion miles. As defined by the International Astronomical Union (IAU), a light-year is the distance that light travels in vacuum in one Julian year (365.25 days). Because it includes the word “year”, the term light-year is sometimes misinterpreted as a unit of time.

The light-year is most often used when expressing distances to stars and other distances on a galactic scale, especially in nonspecialist and popular science publications. The unit usually used in professional astrometry is the parsec (symbol: pc, about 3.26 light-years; the distance at which one astronomical unit subtends an angle of one second of arc).

Paul J. Zak. Zak, is the founding Director of the Center for Neuroeconomics Studies and an internationally recognized expert on the neuroscience.…video and podcast are here…
Next Post: 89th Oscar’s was a Good News Show for many, exciting, great sets, talents, audience participation, and even a mistake that reminds us that we are just humans…..