You are here: Home / Military / U.S. ARMY RESERVE Celebrating 114 YEARS of Military Service to our Nation

Listen to “U.S. ARMY RESERVE Celebrating 114 YEARS of Military Service to our Nation” on Spreaker. 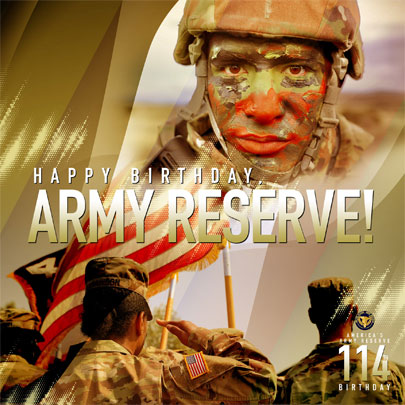 Please join Lieutenant General Jody J. Daniels, the Chief of Army Reserve and Commanding General, U.S. Army Reserve Command, discusses the significance of the Army Reserve’s 114th birthday and how the Soldiers are preparing to serve, lead, and shape the future. She will also talk about her career and the many ways in which Army Reserve Soldiers have served their communities and country–all while pursuing a civilian career or attending college full-time.

On April 23rd the Army Reserve will celebrate its 114th birthday with the theme, ‘America’s Army Reserve and its People, Shaping Tomorrow!’ Throughout history, Soldiers have leveraged their professional skills while serving in uniform, adding substantial value and depth to the force, with skills, education and expertise developed in the private sector. As the Army Reserve looks ahead to the future, it will be one of the most experienced and diverse forces in our Nation’s history.

The service is celebrating the generations of men and women who embrace their roles as “Citizen Soldiers,” continuing a proud and distinguished legacy of service. Army Reserve Soldiers have integrated their military service with civilian careers, family, and personal lives, succeeding and thriving in the workplace and on the battlefield. They are doctors, lawyers, academics, scientists, engineers, cyber specialists, police officers, first responders, transportation specialists, administrators, and more–and they’re at the top of their fields.

Since 2001, more than 420,000 Army Reserve Soldiers have been mobilized and routinely deployed in 23 countries around the world. From natural disasters to national emergencies, the Army Reserve has never failed to answer the Nation’s call.

Daniels holds a bachelor’s degree in Applied Mathematics (Computer Science) from Carnegie Mellon University, a master’s degree and Ph.D. in Computer Science from the University of Massachusetts (Amherst) as well as a master’s degree in Strategic Studies from the United States Army War College. Lt. Gen. Daniel’s military career has been a mix of active and Reserve duty service and she describes herself as an “Army brat.” Her father retired as a Lieutenant Colonel in the Army Corps of Engineers.

10 minutes.
Next Post: Earth Day 4/22 Times Square World Broadcast was a great success, along with a Ukrainian Interfaith Benefit, please support it asap.