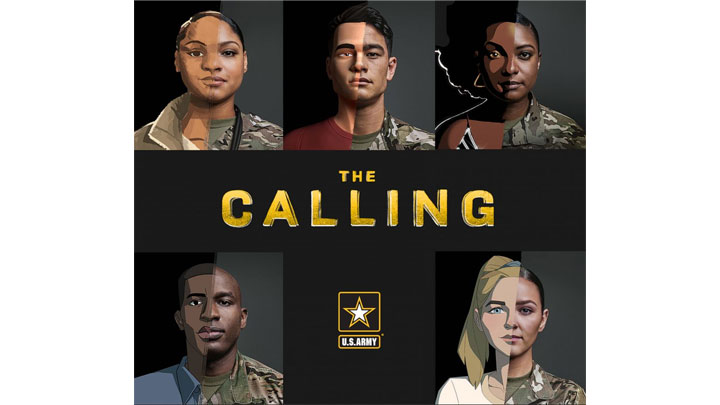 GoARMY.com/TheCalling
1st Lieutenant David Toguchi discusses “The Calling,” his role in the campaign and why he thinks this innovative approach is important.

“The Calling” Film Series Tells the Surprising, Emotional Stories of Soldiers Behind the Uniform
“The Calling” is a new animated film series from the U.S. Army designed to profile the deeply emotional and diverse origin stories of five Soldiers as they make the most important decision of their lives: answering the call to serve.
The new series shows that Soldiers are so much more than their tough exteriors as it sets out to close the relatability gap between Gen Z and America’s largest military branch.
• Research shows many youth see the Army as a “distant star,” a place that requires a nearly superhuman level of discipline and excellence and is set apart from daily life.
• Similarly, many youth can’t connect with Soldiers and fail to see any commonalities in terms of interests, abilities, and goals.
• At a time of a widening military-civilian divide, “The Calling” makes the Army more accessible by bringing audiences into the lives and motivations of the people inside it: Soldiers.
The animated anthology is a distinct departure from previous Army campaigns – both for its arresting visual approach and its intimate portrayal of the people behind the uniform. By acknowledging that Soldiers are real people with their own hopes, dreams, fears, aspirations, families, friends, and obstacles to overcome, “The Calling” turns what was once a one-dimensional view of Army Soldiers into something relatable and more human. Rooted in the premise that you can’t truly know someone until you understand where they came from, the campaign shows that you don’t have to be born a warrior to eventually become one. Anyone can hear the calling.
Animation was a clear creative choice for “The Calling” because of its visual interest, narrative flexibility, and Gen Z appeal thanks to the popularity of events like Comicon and animated dances and videos. Animation also provided the opportunity to give each Soldier’s story a unique style and tone that underscored just how diverse each story is from the next. Through the expressive power of animation, the campaign conveys more than just events. It conveys emotion.
Interview is courtesy: U.S. Army