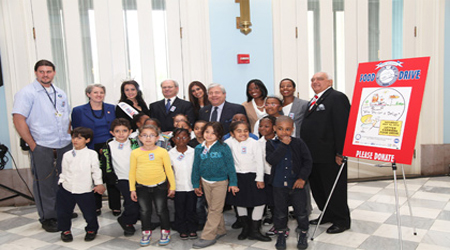 On Thursday, May 3 at 12:00 noon a media conference will be held at Borough Hall to announce the annual Stamp Out Hunger Food Drive in Brooklyn. Stamp Out Hunger across America is providing assistance to the millions of Americans who are struggling to put food on their tables every day.

Now in its 20th year, the Stamp Out Hunger effort is the nation’s largest single-day food drive. It will be held on Saturday, May 12. In 2011, drive organizers across the country collected more than 70 million pounds of total food donations for the eighth consecutive year.

The United States Postal Service, its Letter Carriers and Brooklyn Borough President Marty Markowitz are a force united in this, the largest single day food drive in America.

May 7 – May 11 extended food dates for Brooklyn residents

Despite the generosity of millions of Americans who have supported the letter carriers’ food drive in previous years, the need for food assistance still exists for many families. According to the U.S. Department of Agriculture’s annual study measuring food security in the United States, nearly 49 million Americans, including more than 16 million children, are struggling with hunger.

In addition to the U.S. Postal Service, Campbell Soup Company, AARP, Valpak, the National Rural Letter Carriers’ Association, the AFL-CIO, United Way and Uncle Bob’s Self Storage are supporting the drive this year.