You are here: Home / All We Need Is Love / Disability / Victor Calise, Commissioner, Click Here for Video & Podcast… 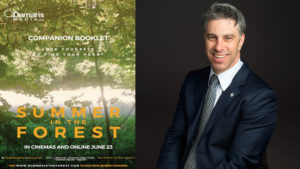 While riding a mountain bike in Forest Park in 1994, Victor sustained a spinal cord injury. He embraced this life altering challenge, became involved with disability sports through the United Spinal Association and focused on sled hockey. Dedication, passion and drive led to representing the United States on the 1998 Paralympics Sled Hockey team in Nagano, Japan.

Working initially as United Spinal’s Recreation Coordinator, he rose rapidly through the ranks reaching the title of Director of Sports Marketing. In October of 2006, Victor joined the NYC Department of Parks & Recreation as their ADA Coordinator overseeing accessibility projects throughout the five boroughs.

The parks system is a historic collection of properties, most of which were designed and built prior to accessibility laws. He coordinated with staff at all levels, improving compliance with the law while producing a transition plan to increase access in the city’s parks, beaches, recreation centers and other facilities.

In June 2012, Victor was appointed the Commissioner of the Mayor’s Office for People with Disabilities by Mayor Michael Bloomberg, and then reappointed by Mayor Bill De Blasio in 2014.

He advises the Mayor on issues affecting over 900,000 New Yorkers with a Disability and 6 million visitors with a disability. He is the liaison between the disabled community and City government, works to connect with the services they need and is the disability policy advisor to City agencies and the Administration. He spearheads myriad projects, partnerships and initiatives that better the lives of people with disabilities; advocates for the passage of legislation to help the disabled community; and is the Chair of NYC Building Code Accessibility Committee.

Victor, his wife and their two children are native New Yorkers.