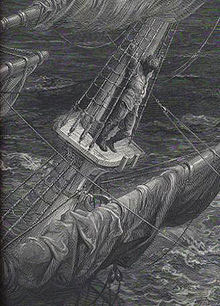 The Rime of the Ancient Mariner recounts the experiences of a sailor who has returned from a long sea voyage. The mariner stops a man who is on his way to a wedding ceremony and begins to narrate a story. The Wedding-Guest’s reaction turns from bemusement to impatience to fear to fascination as the mariner’s story progresses, as can be seen in the language style: Coleridge uses narrative techniques such as personification and repetition to create a sense of danger, the supernatural, or serenity, depending on the mood in different parts of the poem.

The poem begins with an old grey-bearded sailor, the Mariner, stopping a guest at a wedding ceremony to tell him a story of a sailing voyage he took long ago. The Wedding-Guest is at first reluctant to listen, as the ceremony is about to begin, but the mariner’s glittering eye captivates him.

The mariner’s tale begins with his ship departing on its journey. Despite initial good fortune, the ship is driven south by a storm and eventually reaches the icy waters of the Antarctic. An albatross appears and leads the ship out of the ice jam where it is stuck, but even as the albatross is fed and praised by the ship’s crew, the mariner shoots the bird:

How a Ship having passed the Line was driven by storms to the cold Country towards the South Pole; and how from thence she made her course to the tropical Latitude of the Great Pacific Ocean; and of the strange things that befell; and in what manner the Ancyent Marinere came back to his own Country.
PART I
It is an ancient Mariner,
And he stoppeth one of three.
‘By thy long grey beard and glittering eye,
Now wherefore stopp’st thou me?

for more info, go to https://www.poetryfoundation.org/poems/43997/the-rime-of-the-ancient-mariner-text-of-1834

Welcome to Myofascial Release – John F. Barnes
Next Post: Joe Barello Checks in with the US Navy! “Classic Good News” 04/25/07