What Would You Write If You Only Had a Moment?

You are here: Home / All We Need Is Love / What Would You Write If You Only Had a Moment? 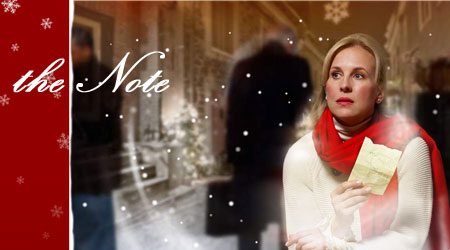 Emmy-Winning Actress Genie Francis, of General Hospital, Stars in The Note, A Holiday Movie That Unleashes the Power of the Written Word What would you write if you only had a minute to leave a note for someone you loved? Who would you reach out to? Would you express love, appreciation, regret?

This is one of the central themes of the Hallmark Channel Original Movie The Note, a wonderful holiday movie that explores the possibilities of reconciliation and love during this special time of year. Based on the best-selling novel by Angela Hunt, The Note stars Emmy Award winner Genie Francis (Laura from General Hospital) as Peyton MacGruder, a struggling advice columnist who is given an ultimatum to bring her numbers up, or else. When a horrific plane crash kills all aboard in the waters near her office, Peyton suddenly finds herself in possession of a scrap of paper containing a hastily written but heartfelt message from one of the passengers to his child. Inspired by the power of the words, Peyton pledges to discover the notes intended recipient and deliver it by Christmas, keeping her readers up-to-speed in her column. Along the way, she realizes that the note has the power to affect many more lives than just the person it was written for.

As part of the films debut, the Hallmark Channel is exploring the power of a few words on the lives of others in a soon-to-be launched Web site that will be a catalyst for real-life reconciliations. If a parent wishes to speak to an estranged child, a pro athlete wants to thank his high school coach or if someone needs to express their feeling to the one that got away, Hallmark Channel will do its best to put their words in front of millions, hopeful that it will result in heartfelt reunions. http://hallmarkchannel.com/Programm/Default_CustomPageWithBanner.aspx?Simscode=419-24096&ID=33