You are here: Home / Good News To Go / Where Did the Peace Sign Come From? 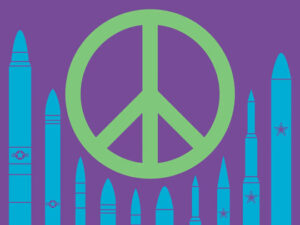 Occasionally, maligned as an anti-Christian symbol (an upside-down broken “Nero-cross”), a satanic character, or even a Nazi emblem, the iconic peace sign is apparently not so innocent to everyone. Thankfully, the symbol has a clear history, and its origin is not so controversial. The modern peace sign was designed by Gerald Holtom for the British Campaign for Nuclear Disarmament in 1958. The vertical line in the center represents the flag semaphore signal for the letter D, and the downward lines on either side represent the semaphore signal for the letter N. “N” and “D”, for nuclear disarmament, enclosed in a circle. Holtom also described the symbol as representing despair, with the central lines forming a human with its hands questioning at its sides against the backdrop of a white Earth. It is said that Holtom originally considered using a Christian cross but disliked its association with the Crusades and ultimately chose something he considered to be more universal.