You can escape the box and live a life of miracles – Lessons from a Woodstock journey by Bill McCarthy.

You are here: Home / Today's Good News / You can escape the box and live a life of miracles – Lessons from a Woodstock journey by Bill McCarthy. 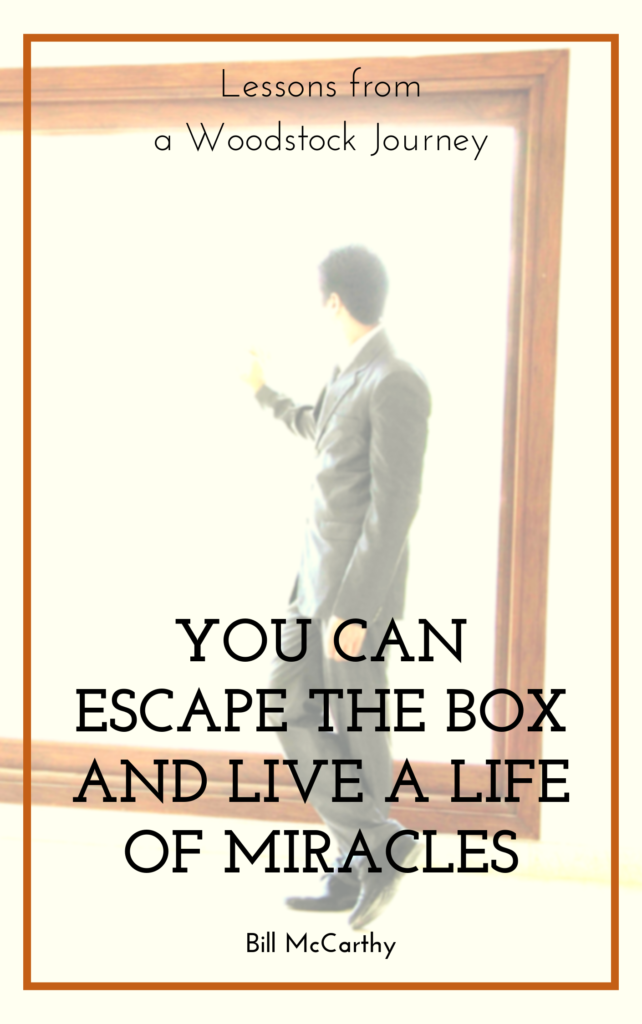 You can escape the box and live a life of miracles – Lessons from a Woodstock journey by Bill McCarthy.  HOW WOODSTOCK CHANGED MY LIFE In 1969 I was a shy young boy studying to be a history teacher. Then I went to Woodstock and everything changed. I have written a book about the life-changing lessons I learned from being at Woodstock. Escaping The Box And Living A Life Of Miracles: Lessons From a Woodstock Journey. The book gives the readers the tools necessary to use The Power Of Intention to manifest their dreams. Through a series of stories the book highlights how attending the Woodstock Festival in 1969 inspired me to continuously step outside of my comfort zone into areas that I had no experience in to manifest my dreams. Immediately following Woodstock, I and a few friends envisioned a music festival in our home town of Pawtucket, Rhode Island. We had never produced anything in our lives, but through The Power of Our Intention we manifested The First Sunfeast Celebration which drew an audience of 10,000 people. We manifested the Sunfeast in only one month. That’s when I knew my destiny was to be an event producer, not a history teacher. This was the first of many Woodstock inspired events using the Power of Intention. After the Sunfeast Celebration I moved to San Francisco where I envisioned and co-produced my first event, the San Francisco Unity Fair. The event, which brought together 45 diverse organizations, was headlined by the Jefferson Starship and The Grateful Dead. The media stated there were between 40,000 to 50,000 people in attendance at the fair. Following that I produced The Spirit of America Festival headlined by Santana, and was a producer for the official celebrations of the 20th and 30th Anniversary of the Summer of Love and many concerts featuring musicians from the original Woodstock Festival including: The Grateful Dead, Jefferson Starship (formerly known as Jefferson Airplane), Carlos Santana, Richie Havens, Country Joe McDonald, David Crosby, Stephen Stills, Graham Nash, Iron Butterfly, and Sha, Na, Na. Wavy Gravy was the emcee for many of our concert events. Following the events in San Francisco, I produced major events in Los Angeles and New York City. In addition I have organized international media campaigns, produced national television programs and worldwide Internet broadcasts streaming live from the United Nations. This was all made possible through The Power of Intention. The book will be launched on Thursday, August 15th, as a Kindle Book on Amazon for 99 cents. If you are interested I can send you a pdf pre-release copy of the book. Bill McCarthy is a special event producer, television producer and Internet producer. He is also the founder and president of Unity Foundation, a non-profit organization with a 43 year history of promoting peace, cooperation and unity throughout the world. Bill has been the contributor to seven best selling books as well as the official publication of the United Nations. For his 40 years of volunteer service, Bill McCarthy received the Presidential Lifetime Achievement Award from President Obama. FOR IMMEDIATE RELEASE For more information contact Bill McCarthy (760) 464-0334