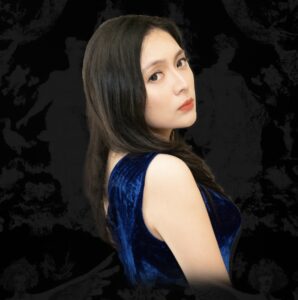 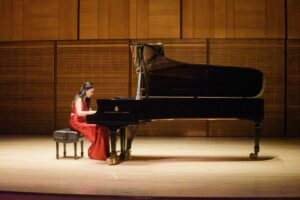 “In difficult life moments, music can be a way to express who you are and Chen excels in that. Her playing is powerful and compelling and transports you on a very visceral level from deep reflection and calm to feeling joyful and exultant. Chen’s versatility and choice of music by Franz Liszt illustrates her ability to play some of the most technically difficult music that has ever been composed for piano…and the inclusion of music from the Tang Dynasty (which was the Golden Age of culture and the arts) was beautiful and exquisite. Chen is a fascinating and unique pianist who mesmerized the audience for ninety minutes. During intermission a patron turned to me and said, “She has magic fingers. She is magnificent.” I am sure that we will see and hear more of Chen Wang on the global concert stage. Congresswoman Grace Meng issued her a certificate of Outstanding and Invaluable Service to the Community. 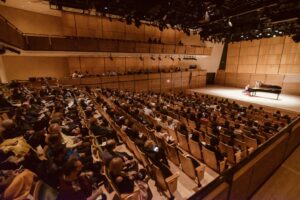 A patron stated:
“The program Dr. Wang offered was important to note as it was at the top level in piano repertoire in terms of musicality and technical difficulty. The success of her performance can be attributed to Dr. Wang’s reputation as a promising and respected talent in piano performance. The extreme difficulty of the repertoire, which included Franz Liszt’s Soirées de Vienne, S.427, No. 6 (Valses caprices d’après Schubert), Three Petrach Sonnets from Années de pèlerinage, S.161, Second Year, and “La danza from Soirées musicales de Rossini, S. 424 gained the attention of music aficionados. Pianists must possess outstanding skills to execute the works of Liszt successfully. Dr. Wang met that challenge. Her extraordinary musical expression was truly effective in delivering the dramatic impact to the audience which warranted two standing ovations after the last piece finished.
Her musicianship was fine and profound, with strong and well controlled connections of all phrases. Her rare skills allow her to deliver music in ways others cannot and distinguishes her from other musicians.” 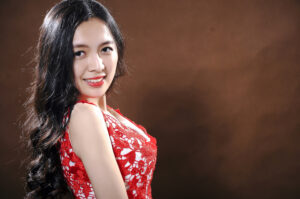 Chinese pianist Chen Wang began her piano studies at the age of five & was admitted to the middle school affiliated with Central Conservatory of Music in Beijing at the age of eleven. She continued her studies in the United States with famous pianists & educators including Deborah Moriarty, Panayis Lyras, Stephen Drury & William Heiles at the New England Conservatory, U niversity of Illinois at Urbana Champaign & Michigan State University. She holds a DMA in Piano Performance from Michigan State University. 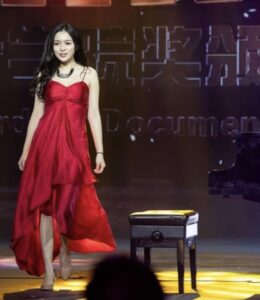 In China, Chen was invited to be a spokesperson & guest pianist in the ninth World’s Children Call for Peace event in Beijing, together with over 100 institutions & children from more than 60 countries. In the US, Chen has given performances for the City of Boston, Omaha Summit at the 53 rd Warren Buffett Berkshire Hathaway Meeting & Massachusetts General Hospital. She received the Global Youth Leadership Award at the United Nations Headquarters Global Social Responsibility Summit in New York in 2018. This year, she gave solo piano performance at World First Metaverse Lantern Festival & North America Virtual Lunar New Year Gala. While working towards a double performance major in piano & percussion in the U.S. on a full scholarship, Chen discovered the interconnection between the two & developed her own performance style. Incorporating East Asian philosophy & western classical music, from Chinese poetry in the Tang Dynasty to Italian Renaissance literature, she explores the connections among nations, people & nature. 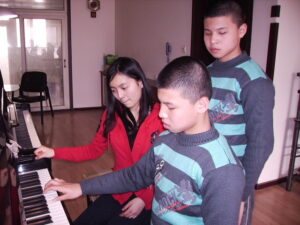 For more information on Dr. Chen Wang go to www.cwangmusic.org.