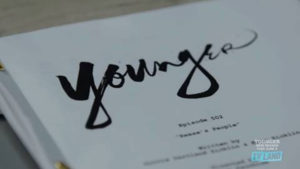 We are sending you the links with the understanding that you will not disclose the reveal at the end of the premiere episodes prior to the episodes airing on June 5. The screeners are considered confidential and proprietary material of Viacom Media Networks. It is solely intended for your viewing purposes, and should not be shared with, transferred or sold to any other individual or entity. Any distribution, copy or unauthorized use of these screeners are strictly prohibited. As always, we kindly ask that you not reveal major plot points to your readers. In receiving this screener, you agree to the terms above.

Episode 1: “Hello, Goodbye” – Back from summer break, Mrs. Adler discovers an unwanted visitor in her trailer, while Ms. Watson finds herself newly poor, putting the Back to School Mixer in jeopardy.

Episode 2: “Of Lice and Men” – The teachers must fend off contamination when a lice outbreak invades the school.

From “Sex and the City” creator Darren Star and starring two-time Tony® winner Sutton Foster, Hilary Duff, Debi Mazar, Miriam Shor, Nico Tortorella, Peter Hermann, Molly Bernard and Charles Michael Davis, “Younger” follows Liza, a woman who lies about her age at her job in the highly competitive world of publishing. As Liza’s personal and professional lives have become irreversibly intertwined over time, keeping the secret proves more and more difficult, and she finally reveals the truth to Kelsey, her friend and partner at work. Still, Liza must keep up appearances, as she is torn between her attraction to her boss and the fact that their professional relationship was built on a lie. “Younger,” which films at the legendary Silvercup Studios in New York, is created, executive produced and written by Darren Star, with Tony Hernandez of JAX Media executive producing for TV Land. Dottie Zicklin and Eric Zicklin also serve as executive producers and writers on the series.

TV Land’s critically-acclaimed comedy “Teachers” revolves around a group of elementary school teachers who are trying to mold the minds of America’s youth, but don’t have their own lives together at all. The series is created by and stars the improv group The Katydids – Caitlin Barlow (Ms. Cannon), Katy Colloton (Ms. Snap), Cate Freedman (Ms. Feldman), Kate Lambert (Ms. Watson), Katie O’Brien (Ms. Bennigan) and Kathryn Renée Thomas (Mrs. Adler). Along with The Katydids, showrunner Ian Roberts executive produce the series. Matt Miller, Alex Fendrich and Matt Abramson are also executive producers.