A SPECTACULAR SUMMER OF FREE CONCERTS 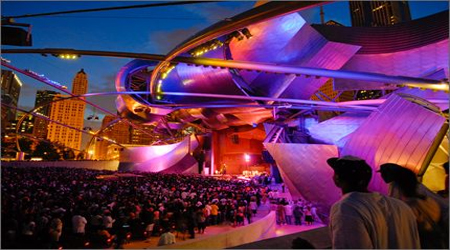 Classical, Jazz and Indie-Rock Series Return Along with the All-New
“Loops and Variations” Series Mixing New Music with Electronica

Chicago’s summer concert season kicks off on Memorial Day with the opening of Millennium Park’s popular cutting-edge indie rock and pop music series, Downtown Sound: New Music Mondays.  Premiering a week later is Millennium Park’s all-new program, Loops and Variations, a series of six concerts that mix new music with electronica. The music continues with the return of the beloved Grant Park Music Festival celebrating its 78th anniversary and the acclaimed Made in Chicago: World Class Jazz series, which this year will showcase jazz with a distinctively Chicago flavor on six separate nights, culminating in the 34th Annual Chicago Jazz Festival.

All of the concerts are free and are presented by the Chicago Department of Cultural Affairs and Special Events. Concerts take place at the Frank Gehry-designed Jay Pritzker Pavilion.

“Millennium Park has become a unique gathering place right in the heart of downtown Chicago, where people from all over come to enjoy its magnificent art and architecture, as well as its free cultural programming,” said Michelle T. Boone, Commissioner of the Chicago Department of Cultural Affairs and Special Events. “Now in its eighth season, the Park continues to be an international destination, delighting visitors from near and far.”

“Music in Millennium Park will be more diverse than ever this year with the introduction of the new Loops and Variations series, said Angel Ysaguirre, Deputy Commissioner for Arts Programming, Chicago Department of Cultural Affairs and Special Events. “We invite visitors and Chicagoans alike to grab a blanket and sit on the lawn, or take a seat and discover the sounds of summer, played out over the Pritzker Pavilion’s state-of-the-art sound system.”

Highlights of the summer music season are listed below. A complete calendar will be released in mid-April.

Grant Park Music Festival
June 13—August 18, Wednesdays and Fridays at 6:30 p.m.; Saturdays at 7:30 p.m.
Celebrate the Festival’s 78th season with 30 stunning performances featuring the acclaimed Grant Park Orchestra and Chorus. Highlights include the Golden Anniversary Choral Spectacular (June 29 and 30); Only Converge: An Exaltation of Place, a world premiere by Michael Gandolfi (June 15 and 16); Sleepers and Dreamers, a world premiere by Sebastian Currier (July 6 and 7) and Dvořák:The Spectre’s Bride (August 17 and 18). grantparkmusicfestival.com

Made In Chicago: World Class Jazz
July 19—August 30 (no concert August 9), Thursdays at 6:30 p.m.
Prepare for a feast that will fill every appetite for jazz, from each region of the music—blues, boogie, Latin, Bop and beyond. Highlights include Blowin’ in from Chicago featuring Edward Wilkerson Jr. and Ari Brown (July 19); Frank Rosaly’s ¡Todos de Pie! (All Stand Up! on August 23) and Exquisitely for Ella: A Songbook Tribute to Ella Fitzgerald with Dee Alexander, Frieda Lee and Spider Saloff, opening the 34th annual Chicago Jazz Festival (August 30).

For more information about all of the events in Millennium Park this summer, visit millenniumpark.org, call 312.742.1168, visit Millennium Park on Facebook or follow us on Twitter @Millennium_Park.

Millennium Park, managed and programmed by the Chicago Department of Cultural Affairs and Special Events, is an award-winning center for art, music, architecture and landscape design. The result of a unique partnership between the City of Chicago and the philanthropic community, the 24.5-acre park features the work of world-renowned architects, planners, artists and designers. Among Millennium Park’s prominent features are the Frank Gehry-designed Jay Pritzker Pavilion, the most sophisticated outdoor concert venue of its kind in the United States; the interactive Crown Fountain by Jaume Plensa; the contemporary Lurie Garden designed by the team of Gustafson Guthrie Nichol, Piet Oudolf and Robert Israel; and Anish Kapoor’s hugely popular Cloud Gate sculpture.

Chicago Department of Cultural Affairs and Special Events
The Department of Cultural Affairs and Special Events (DCASE) is dedicated to promoting and supporting Chicago’s arts and culture sector. This includes, but is not limited to: fostering the development of Chicago’s nonprofit arts sector, independent working artists, and for-profit arts businesses; presenting high-quality, free or low-fee cultural programs accessible to residents and visitors; and marketing the City’s cultural assets to local, regional, and global audiences. DCASE produces nearly 2,000 public programs, events and support services annually, generating millions in economic benefits for the City of Chicago.