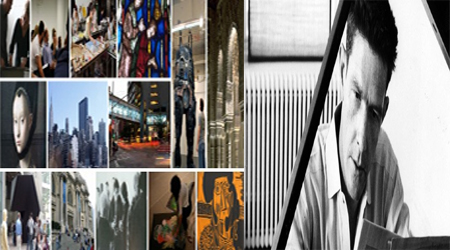 an exhibition marking the centennial in 2012 of John Cage’s birth,

and commemorating the widespread effect of the artist’s work

on generations of artists

on view at the Hunter College Time Square Gallery

The Hunter College Art Galleries presents Notations: The Cage Effect Today, an exhibition which marks the centennial in 2012 of John Cage’s birth, and commemorates the widespread effect of the artist’s six decades of assiduous, and relentless inventive creation on subsequent generations of artists. Cage has been described as the most important artist of the second half of the 20th century, influencing many artists from Jasper Johns to Gerhard Richter, Robert Rauschenberg to Ellsworth Kelly, Nam June Paik to Yoko Ono, and from Joseph Beuys to Hélio Oiticica—each of whom played a significant role in the configuration of today’s art world. Cage has never been more vital than today—as seen through the legions of artists around the globe who tenaciously explore many of the tropes that Cage left behind. Notations: The Cage Effect Today examines the reverberation of his diverse influence throughout North America, Asia, Europe, and Latin America. Some 28 artists selected for inclusion in the exhibition include Waltercio Caldas, Hanne Darboven, Liz Deschenes, David Lamelas, Christian Marclay, Kaz Oshiro, and Fred Sandback among many others.

These artists and their contemporaries have been inspired by John Cage’s multifarious approach to making art. Only through a close examination of what succeeding generations of artists have to say is it possible to measure the far-reaching extent of Cage’s unique legacy. The exhibition opened February 17, 2012 and remains on view through April 21, 2012.

The Hunter College Art Galleries, under the auspices of the Department of Art and Art History, has been a vital aspect of the New York cultural landscape since its inception over a quarter-century ago. This exhibition, curated by Joachim Pissarro, Bershad Professor of Art History and Director of the Hunter College Art Galleries; together with Bibi Calderaro; Julio Grinblatt (MFA ’10); and, Michelle Yun, is the result of an educational process developed with graduate students, who have been engaged in the curatorial process at every level. This project underscores the Galleries’ unique ability to share the highest levels of academic scholarship and curatorial connoisseurship with the student community and the general public, thus facilitating a dynamic cultural exchange.

Notations: The Cage Effect Today, is accompanied by a fully illustrated catalogue with essays by Dr. Pissarro, Bibi Calderaro and Julio Grinblatt and includes plate entries by graduate students. A plethora of public programming including inter-disciplinary concerts, film screenings and a mushroom hunting event are being organized to complement the exhibition. Please visit our exhibition website for further details: http://www.notationsthecageeffecttoday.org/

Hunter College is deeply grateful to the following donors, whose generous support has made this exhibition possible: YoungArts, The Core Program of the National Foundation for Advancement in the Arts; Peter M. Brant, The Brant Foundation, Inc.; Colección Patricia Phelps de Cisneros; The Foundation To-Life; Agnes Gund; The Andrew W. Mellon Foundation; and The Ruth Stanton Foundation.