Amateur Night at the Apollo Theater

You are here: Home / All We Need Is Love / Amateur Night at the Apollo Theater 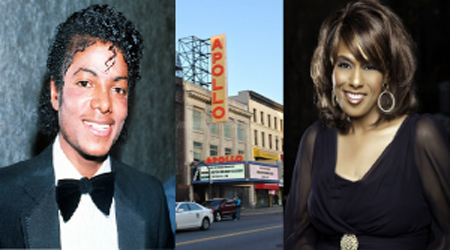 WHAT:  On Wednesday, February 1st the legendary Apollo Theater will kick off [the new season of] its signature program, Amateur Night, the world’s most famous and enduring amateur talent competition. Jennifer Holliday, the original Broadway Dreamgirl, will grace the Apollo stage as a special guest star performing “And I’m Telling You I’m Not Going.” The evening will also mark the globallaunch of Amateur Night Digital (amateurnight.org), which will enable Apollo fans worldwide to track the progress and vote for their favorite Apollo Amateur Night contestants. There will also be representatives from Tek Serve on hand to help patrons access the mobile app.
The Apollo’s Amateur Night has long been celebrated as a platform for up and coming talent to showcase their skills. It is also known as one of the only venues in the country where a live audience response can make or break a career. Each Amateur Night is hosted by the comedian Capone and features staples like C.P. Lacey in the role of the “Executioner” and the Apollo’s Amateur Night house band, fronted by Onree Gill. The new season of Amateur Night will start Wednesday, February 1st at 7:30pm, and shows will occur every Wednesday through October 2012. Amateur Night is sponsored by the Coca-Cola Company.
WHERE:      The Apollo Theater
253 West 125th Street
New York, NY

PHOTO OP: All Media MUST RSVP prior to event. ALL requests for coverage must be submitted on company letterhead to Nina Flowers via email to nina.flowers@apollotheater.org  or fax 212.749-2743.

ABOUT US:  Now in its 78thyear, the Apollo is a national treasure that has had significant impact on the development of American culture and its popularity around the world.  Since introducing the first Amateur Night contests in 1934, the Apollo Theater has played a major role in cultivating artists and in the emergence of innovative musical genres including jazz, swing, bebop, R&B, gospel, blues, soul, and hip-hop.  Ella Fitzgerald, Sarah Vaughan, Billie Holiday, Sammy Davis, Jr., James Brown, Michael Jackson, Bill Cosby, Gladys Knight, Luther Vandross, D’Angelo, Lauryn Hill, and countless others began their road to stardom on the Apollo’s stage. The Apollo Theater’s new artistic vision builds on its legacy.  New Apollo programming has music as its core, driving large scale and more intimate music, dance and theater presentations.  The Apollo will continue to present historically relevant presentations, as well as more forward-looking, contemporary work. Based on its cultural significance and architecture, the Apollo Theater received state and city landmark designation in 1983 and is listed on the National Register of Historic Places. For more information, visit www.apollotheater.org.