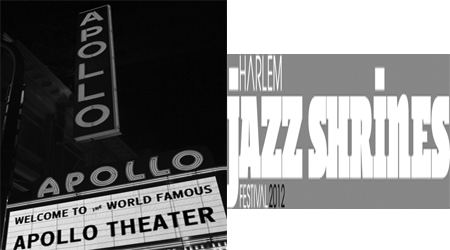 The Apollo Theater will celebrate the 2nd annual Harlem Jazz Shrines Festival, May 7–13, 2012,with a series of special shows featuring some of the finest talents in contemporary Jazz. Programs include Wycliffe Gordon’s Jazz à la Carte, a modern day variety show – complete with a big band, powerhouse vocal performances and show-stopping dance numbers – returning to the Apollo for a second year; intimate Apollo Music Café Jazz Nights on the Apollo Soundstage; and a week-long series at Harlem’s legendary Showman’s Jazz Club. Organized by the Apollo Theater, Harlem Stage, and Jazzmobile in collaboration with Columbia University, the Harlem Jazz Shrines festival honors the rich legacy of jazz in the uptown community and the neighborhood’s historic jazz shrines. This new addition to the New York City and Harlem cultural calendar showcases a range of today’s top artists and emerging talent with concerts and events at venues across Harlem.

“For much of the 20th century, Harlem was synonymous with jazz. Few other communities fostered jazz as a popular art form for both musicians and audiences, and the Apollo was at the forefront of that movement,” said Apollo Theater Executive Producer Mikki Shepard. “From the historic night in 1934 when Ella Fitzgerald first won Amateur Night, to performances by Benny Carter, Nat ‘Cannonball’ Adderley, Louis Armstrong, Count Basie, Billie Holiday, and Cab Calloway, the list of jazz greats who have played the Apollo goes on and on. We are proud to celebrate Harlem’s jazz heritage as part of the Jazz Shrines Festival, and are particularly thrilled to present Jazz à la Carte, a show that truly embodies the Apollo’s rich jazz history, as well as serves as a platform for emerging talent and established artists.”

For his part, celebrated trombonist Wycliffe Gordon is excited to participate in Jazz a la Carte at the Apollo again this year. “This is the first time I’ve gotten the opportunity to musically direct and perform on a show in NYC that has all of the elements of entertainment that I love and the fact that this show was voted one of the top five “Jazz” performances of 2011” speaks volumes. I’m proud to be able to present Jazz a la Carte at the Apollo and looking forward to it being even better this year.”

In the 1934, Apollo owners Frank Schiffman and Leo Brecher opened the Theater with “Jazz à la Carte,” a variety show featuring Ralph Cooper, Benny Carter Big Band and “16 Gorgeous Hot Steppers.” For the inaugural Harlem Jazz Shrines festival in 2011, Apollo producers created a show modeled after the original Jazz a la Carte under the guiding genius of composer, performer, arranger extraordinaire, Wycliffe Gordon and with staging by director/choreographer and Broadway veteran Kenneth L. Roberson. This new show featured a diverse array of jazz artists in various disciplines of the genre spanning across different generations and was hailed by the Wall Street Journal as one of “the city’s best jazz moments in 2011.” With that same focus in mind, Jazz à la Carte returns this year with Gordon at the helm, venerable performer Maurice Hines as host, and performances by tap star Savion Glover, the Juilliard Jazz Orchestra, vocalist Theresa Thompson, pianist Aaron Diehl, trumpeter Philip Dizack, trombonist/vocalist Natalie Cressman and chorus dancers “Hot Steppers.” All tickets for this show are $10. For more information, visit www.apollotheater.org.

The Apollo presents two special jazz performances as part of its popular Music Café Series, now in its second season. Uptown’s newest hot spot, Apollo Music Café offers a lounge-like atmosphere to experience innovative, avant-garde performances, with a bar and stage-side seating in the Apollo’s intimate Soundstage. Music Café attracts a wide array of music and art lovers, from downtown hipsters to Harlem tastemakers, continuing the Apollo’s commitment to presenting unique productions that cater to diverse audiences. All tickets for this show are $10. For more information, visit www.apollotheater.org.

An evening of jazz with award-winning vocalist Kellylee Evans, who comes to the Apollo following the release of her recent album Nina, a tribute to the legendary Nina Simone. With her lush, velvet vocals, Evans unleashes a quiet storm of urban jazz fused with soul and pop.

Marc Cary is a four-time Grammy® nominated musical linguist who is fluent in multiple instruments, including the cello, trumpet, drums, and piano. With Cosmic Indigenous, Cary brings the sweet nectar of jazz reinterpreted with Awa Sangho, Daniel Moreno, Sameer Gupta and Igmar Thomas.

Amateur Night at the Apollo: Jazz

Now in its 78th year, Amateur Night at the Apollo has launched the careers of thousands of performers, including Ella Fitzgerald, Stevie Wonder, The Jackson Five, and Lauryn Hill. The Apollo’s signature talent competition attracts aspiring artists and visitors from all over the world, and remains one of New York City’s most popular live entertainment experiences. This special themed Amateur Night will spotlight Jazz, in honor of the Harlem Jazz Shrines festival.

The Apollo Theater will collaborate with Showman’s Jazz Club to present a week of special performances during the Harlem Jazz Shrines festival. A cultural landmark and one of Harlem’s premiere jazz clubs, Showman’s has been a neighborhood fixture since 1942, and has a history of showcasing legendary artists including Pearl Bailey, Eartha Kitt, Jimmy Rogers, Sarah Vaughn, Lionel Hampton, Duke Ellington, Grady Tate and more. A Hammond B-3 organ graces the stage and will be put to good use during the Harlem Jazz Shrines Festival. Artists to perform include Lonnie Youngblood, Lou Volpe, Cynthia Holiday, Sarah McLawler, and Danny Mixon. No Cover Charge. Limited seating. Standing room available, minimum per set applies. Soul food appetizers are available. Two drink minimum per person, per set. Visit www.apollotheater.org for tickets and more information.

Wednesday, May 9 – Lonnie Youngblood and the Blood Brothers

Friday, May 11 – Cynthia Holiday and Friends

*Schedule and Artists Subject to Change

Three esteemed Harlem cultural organizations – the Apollo Theater, Harlem Stage and Jazzmobile – have joined forces to present Harlem Jazz Shrines, a festival celebrating the rich legacy of jazz in the uptown community. Now in its second year, this week-long festival aims to create a resurgence of jazz in Harlem. Jazz will be presented in all its forms and formats, including jazz dance, concert, club, cabaret, and dance events, with a dynamic range of programming highlighting the role that local Harlem venues have played in the development of the genre. Featuring a mix of performances appealing to both novices and jazz aficionados, the festival is designed to draw a diverse audience of neighborhood residents, New Yorkers, and tourists. Tickets are offered at the affordable price of $10 (unless otherwise noted), and festival programming is arranged so that audiences have the option of attending several events each day.  On Friday and Saturday nights, the Festival will provide a shuttle bus to transport audience members between venues.

The Apollo is a national treasure that has had significant impact on the development of American culture and its popularity around the world.  Since introducing the first Amateur Night contests in 1934, the Apollo Theater has played a major role in cultivating artists and in the emergence of innovative musical genres including jazz, swing, bebop, R&B, gospel, blues, soul, and hip-hop.  Ella Fitzgerald, Sarah Vaughan, Billie Holiday, Sammy Davis, Jr., James Brown, Michael Jackson, Bill Cosby, Gladys Knight, Luther Vandross, D’Angelo, Lauryn Hill, and countless others began their road to stardom on the Apollo’s stage. The Apollo Theater’s new artistic vision builds on this legacy. With music as its core, the Apollo’s new programming focuses on large scale and more intimate music, dance and theater presentations.  The Apollo will continue to present historically relevant presentations, as well as more forward-looking, contemporary work. Based on its cultural significance and architecture, the Apollo Theater received state and city landmark designation in 1983 and is listed on the National Register of Historic Places. For more information, visit www.apollotheater.org.

Additional support for Jazz a la Carte is provided by the Ford Foundation and the New York Community Trust, and by public funds from the National Endowment for the Arts.