Ari Mittleman-“Paths of the Righteous”

You are here: Home / Arts & Leisure / Authors / Ari Mittleman-“Paths of the Righteous”

Listen to “Ari Mittleman-"Paths of the Righteous"” on Spreaker. 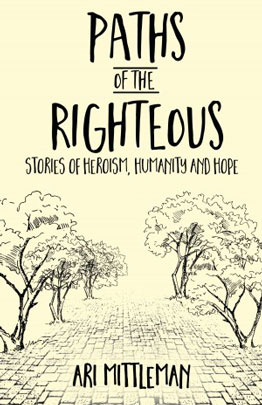 Ari Mittleman-“Paths of the Righteous”, Inspirational stories of heroism, Humanity and hope in lieu of the deadly rise of antisemitism, racially motivated crimes and shootings.

“In today’s world, too often the focus is on division and difference and that’s what is constantly highlighted in the media. As a diplomat, I always try to look for common ground and to focus on the future and not dwell on the past. In an increasingly complex world

Ari Mittleman-“Paths of the Righteous”, Inspirational stories of heroism, Humanity and hope in lieu of the deadly rise of antisemitism, school shootings and racism motivated shootings.

“Paths of the Righteous comes at a time when the Jewish people are under attack for daring to still be here after thousands of years of being hated, assimilated, or both. Read here how Olga Washington refuses to let uninformed anti-Semites decry Israel as apartheid, how Father Desbois repudiates those who would deny the Holocaust with his painstaking work, how Chloe Valdary combats unthinking bias through empathy and an unyielding determination to connect with people rather than make them feel scorned. These and their colleagues are the heroes we need in the 21st century, and I’m grateful to Ari Mittleman for telling their story.” –Elisha Wiesel, son of Nobel Peace Prize recipient Elie Wiesel

After the worst shooting at a Jewish sanctuary in America’s history took place in Pittsburgh three years ago, one man set out to write a book to highlight the good that others do to help uplift a community. Ari Mittleman, who grew up in Pennsylvania, the same state where The Tree of Life tragedy took place, penned an inspiring book, Paths of the Righteous (Gefen Publishing), about eight non-Jews who have gone above and beyond for the Jewish people during a turbulent time.

“Throughout history, Jewish leaders have shown our community and humanity what it means to be a light unto the nations,” says Mittleman. “But do you know the stories of non-Jewish luminaries that uplift our community while inspiring their own?”

Largely unheralded and not in the headlines, their stories can inspire us. They each demonstrate unique attributes. No matter how hidden it may seem during an uncertain journey and challenging times, collectively they teach us what it means to pursue a righteous path in the 21st century.

Ari is available to explore the following:
● The challenges facing Jews and Israel in a time of greatly increased antisemitism.
● How we can come together during this climate of hate and bigotry.
● Why his book identifies what some non-Jews have done for Israel and the Jewish people during turbulent and difficult times.
● How the stories featured in his book give hope, optimism, and inspiration to humanity.
● Where historically strong Black-Jewish civil rights activism and support stands now.
● What it means to be a righteous person today.
● What we can learn from a South African Black woman discussing apartheid, a male Croatian doctor who helps his country come to terms with its WWII past, a Jamaican-American who volunteers to fight wildfires while transcending language barriers on the Gaza border, and a deeply spiritual Latina who convinced the Guatemalan government to open an embassy in Jerusalem.

Mittleman, a columnist for the Times in Israel who has worked with diplomats and government officials from across the world, hopes his book will spur a dialogue that brings people together. Paths of The Righteous features moving stories from four men and four women, a mixture of people with diverse backgrounds – Latino, Black, and White from Africa, Europe, and North America. Together, they remind us how we all must stand up to help one another, even, perhaps especially, when it is to help others beyond our tribe.

“Ari Mittleman reveals eight of those non-Jews who are righteous. Read Paths of the Righteous to be inspired. I survived because of a Catholic woman who risked her life in Poland to save me during the Shoah. Especially in these times, this book is a dose of optimism.’ –Abraham Foxman, Past President of Anti-Defamation League