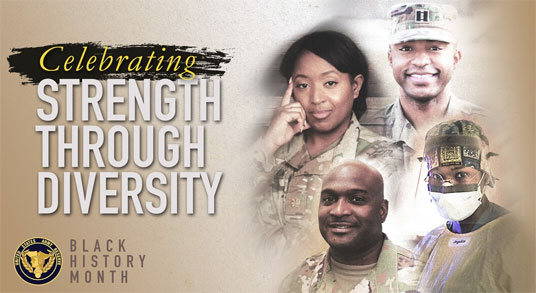 www.usar.army.mil
Each February the U.S. Army Reserve joins the nation in observing and reflecting on the tremendous contributions of Black Americans to our country and our history. It is an opportunity to continue highlighting the achievements of the resilient Black men and women—past and present—who have played an integral role in shaping our military.
The U.S. Army Reserve embraces diversity and recognizes the need to create spaces of belonging for everyone—regardless of race, creed, or color. The Force is dedicated to building cohesive teams in an inclusive environment to fight and win our nation’s wars. The annual commemoration of Black History Month provides time to intentionally honor the legacy of Black people who have served in the Army and reinforce the strength that comes when every member of the Force has the opportunity to reach their full potential.
This year, the Army Reserve is underscoring the importance of Black Health and Wellness by focusing on the legacy of Black scholars and medical practitioners and promoting ways Black Soldiers and their families can prioritize wellness.
The theme is of special concern to our guest, Army Reserve Sergeant Renieal Campbell—a pre-med student who is also making her mark among the ranks as the youngest Drill Sergeant in her battalion, all while working as an entrepreneur, model, and pageant competitor.
In fact, Sergeant Campbell was inspired by Captain DeShauna Barber, the U.S. military’s first Black Army Reserve officer to obtain the title of Miss USA in 2016.
Other Black Soldiers Gaining Recent Prominence:
• Lieutenant General Nadja West became the first Black U.S. Army Surgeon General in 2015 and first Black female Lieutenant General in 2016.
• Lieutenant General A.C. Roper made American history on May 14, 2021, by becoming the first African American Lieutenant General in the Army Reserve.
• Command Sergeant Major Michele S. Jones was selected by Lieutenant General James R. Helmly, former Chief of Army Reserve, to become the Command Sergeant Major of the Army Reserve in September 2003. As a result, she became the first Black woman in U.S. Army’s history to serve as a Division Command Sergeant Major.
Army Reserve Sergeant Renieal Campbell discusses the Army Reserve’s dedication to diversity and ensuring equitable treatment for all its members. She’ll also discuss how Black men and women are helping to change the face of leadership and mentorship in the Army Reserve.
Interview courtesy: U.S. Army Reserve

Finances On Minds of Many as They Prepare for April’s National Tax Day
Next Post: Ms Ma helps those on need during Covid