You are here: Home / Arts & Leisure / ARTISTS BEN MOON AND WILLIAM QUIGLEY RAISE AWARENESS THROUGH ART FOR THE SOLDIER RIDE 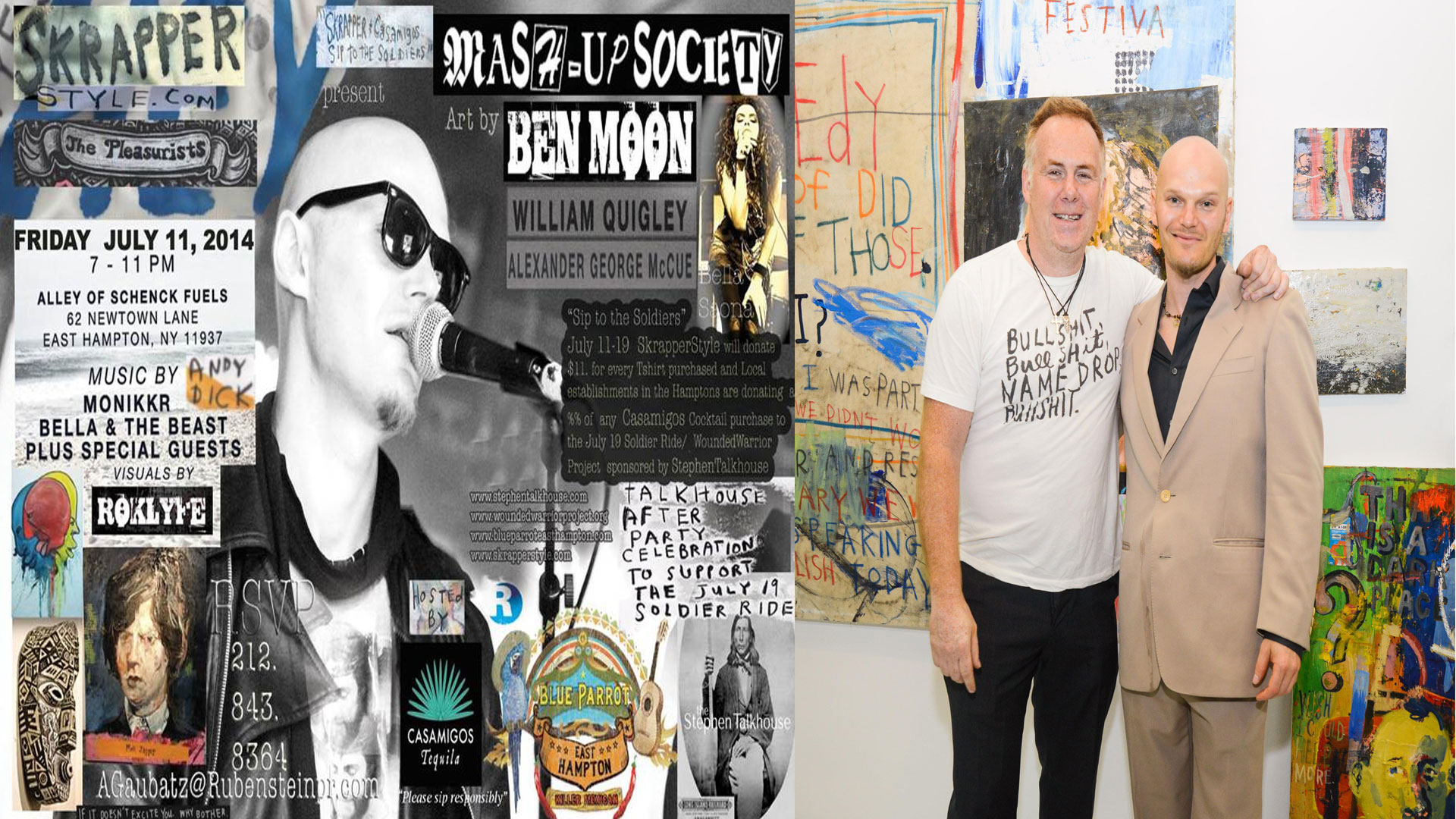 Portion of Proceeds to Benefit The Soldier Ride, a Wounded Warriors Charity Program

Mixed media artist Ben Moon and the renowned artist William Quigley, known as $B!H (BThe Pleasurists, $B!I (B have joined forces and are collaborating to bring the Hamptons their second annual soiree, “Mash – Up Society,” taking place in the midst of ArtHamptons weekend. The opening night party will take place on Friday July 11th at Quigley $B!G (Bs studio on Schenck $B!G (Bs Alley, Skrapper Studios. This exhibit will be a beautiful composition of sights and sounds, and will showcase the art of William Quigley and Ben Moon. Last year the pair showcased the work through powerhouse dealer Mark Borghi Fine Art and sold the infamous Donald Trump portrait to Mr. Trump himself! From the success, Quigley and Moon donated $10,000 to East Hampton $B!G (Bs Legendary Guild Hall. This year Quigley has painted the portraits of Mick Jagger and Ethan Hawke and hopes to garner their attention and attendance to the celebration. His work will also be at Clic Gallery with a rare Print from the Sold Out edition of Audrey Hepburn he made at Boston University.

Moon and Quigley met in 2002 and have been inspired by each other ever since. Quigley notes $B!H (BBen $B!G (Bs one of the purest talents and brilliant minds I $B!G (Bve met. He can do everything. And well. Really well. You should hear him play guitar. $B!I (B The exhibit will showcase Moon’s new work in his BEFORE/AFTER painting series, as well as his mystical musical visual wonderland, $B!H (BROKLYFE $B!I (B featuring performances by DJ Monikkr, and RockStarlet Bella Saona, $B!H (BBella and The Beast $B!I (B, who Quigley found through his collaborations working with the band Dispatch.  Actor/ Comedian Andy Dick has signed on to sing again this year.  Additionally, the work of local fledgling painter Alex George McCue will be debuted at the exhibit.

Quigley and Moon intend to use their passion for art and their local connections to help bring awareness, attention, and respect to our soldiers who have served and continue to protect our country. The duo has collaborated with local artists and businesses including Chris Carney, Peter Honerkamp and Nick Kraus, owners of Talkhouse, and Founders of the Wounded Warrior Founders/ Soldier Ride, along with BlueParrot and Casamigos Tequila. From July 11th through July 19th, a portion of sales from SkrapperStyle Tshirts, Ben Moon merchandise, Quigley prints and Casamigos Cocktails will be donated to Soldier Ride, a Wounded Warriors event in Amagansett on July 19th which aims to use cycling and the bonds of service to overcome physical, mental, or emotional wounds. Moon has also been selected to paint the exterior of a 1985 Rolls Royce “Silver Spur” with his signature black and white designs, which will debut at the opening night party. The car, owned by New York Collector Frank Marzano, has been prepped with a special temporary paint known as “plastic dip.” This car will be auctioned at the end of the summer, with 100% of proceeds going to the Wounded Warriors charity.

This event and surrounding activities has captured television interest from Sony Pictures, Fatstache Productions, Executive Producer, Tony Biancosino, and show creator, Brian Sullivan for a new reality television show about the art world which Quigley has been selected to host. Biancosino has produced popular television shows including $B!H (BShark Tank $B!I (B and $B!H (BTop Chef. $B!I (B A film crew will be in attendance to film the party for the premiere episode. Additionally, Cindy Farkas Glanzrock, President and Owner of Glanzrock Realty Services, is working to strategically place the artists $B!G (B work in hospitality establishments, to help bring emerging artists into public spaces within the Hampton and Montauk communities.

William Quigley has been called $B!H (Ba cultural catalyst $B!I (B and one of the most influential contemporary artists of our time. Due to his global art presence and widespread philanthropy, he was honored in 2007 and named by VH1 as Visual Artist of the Year. Henry McNeil, owner of McNeil Gallery in Philadelphia, launched the artist $B!G (Bs career 30 years ago by placing and selling three of Quigley $B!G (Bs paintings in the same show with Andy Warhol $B!G (Bs $B!H (BImages of a Child $B!G (Bs World $B!I (B exhibit in 1985. It was one of Warhol $B!G (Bs last shows before his death in February 1987. Quigley moved to New York in 1986 to attend Columbia University $B!G (Bs MFA Program and continued painting full-time out of his SOHO art studio while trading work with such artists as Basquiat, Haring, Prince and DeKooning. Gaining national attention, he showed with Manny Silverman Gallery in Los Angeles from 1989 to 1993 before founding the renowned AB Gallery in Los Angeles in 1994 with Pamela Armstrong and Director Dan Bernier. The AB Gallery featured artists Marc Chiat, Steve Hurd, Manuel Ocampo, Dan Fisher, Martin Kersels, Russell Crotty, George Stoll, Jason Rhoades, Mike Bismuth and Kevin Sullivan, who all have gone on to have tremendous success in the contemporary art world. Quigley $B!G (Bs art went on to show with some of the most respected galleries, dealers and museums throughout the world, including: Germany $B!G (Bs Arne Zimmerman Gallery; Pablo $B!G (Bs Birthday, New York; Art Basel, Switzerland and Miami; Scope, Chicago; growing global popularity with shows throughout India and becoming the first American to have his works exhibited at the Miro Foundation in Mallorca, Spain through Galeria Ferran Cano.

As an avid musician and fine arts major at Tulane University, Ben Moon immersed himself in the diverse artistic culture of New Orleans, participating in numerous art shows and performing regularly around town. Even at this early stage, he became fascinated by the ways in which sonic and visual elements could be combined to create a heightened emotional effect. Upon his return to New York, Moon $B!G (Bs work was featured in a series of successful exhibitions in New York, London, New Orleans, and Beijing, as well as at Miami $B!G (Bs Art Basel exhibition. Moon $B!G (Bs latest project, ROKLYFE, marks the full realization of his longstanding fascination with the integration of sonic and visual elements, resulting in a fully immersive environmental art piece where the viewer feels as though they $B!G (Bve literally stepped inside one of his frenetic paintings. Inspired by Andy Warhol $B!G (Bs Factory Parties and the Art Happenings of the late 1960 $B!l (Bs, Moon employs a combination of projected visuals, interactive social media, as well as live and prerecorded music to create a world where art and life come together in a radical new experience, $B!H (Bthe world of Ben Moon $B!I (B