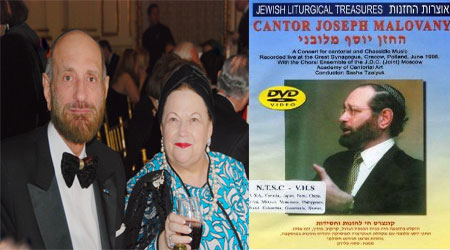 One of the world’s most famous, beloved and highly respected cantors, Joseph Malovany has served as the Cantor of New York’s prestigious Fifth Avenue Synagogue since 1973. He holds the academic position of Distinguished Professor of Liturgical Music at Yeshiva University. He also holds the position of Dean of the J.D.C. Moscow Academy of Jewish Music. Born in Tel Aviv, Israel, he served as Cantor at Tel Aviv’s “Bilu” synagogue, as Cantor of the Israeli Army and at synagogues in Johannesburg, South Africa and London, England. Joseph Malovany is the holder of the highest artistic diplomas from the Music Academy in Tel Aviv and From Great Britain’s Royal Academy of Music. He is also a “Fellow” of the Trinity College of Music and has been awarded with many citations and honors from various national and international organizations; among them is the Tel Aviv University’s Award for “Tolerance and Understanding.” He is Honorary President of the Cantorial Council of America and Past Chairman of the Board of the American Society for Jewish Music. In 1997, the Joseph Malovany Chair for Advanced Studies in Jewish Liturgical Music was established, by New York’s Yeshiva University at its Belz School of Jewish Music. He is the founder and President of the World Jewish Music Foundation, dedicated to “Understanding, Tolerance, Religious Freedom and Human Rights –Via music.”  In 2002, Cantor Malovany was appointed Honorary Chief Cantor of the City of Vilnius, Lithuania.

In late August 2010, at a ceremony in the prestigious Riga Opera House just preceding his monumental and memorable concert, the title of “honorary chief cantor of the city of Riga” and its Great Synagogue was bestowed on Cantor Malovany.   His penetration into the hearts and minds of the people of the Baltics was recognized by the government of Lithuania which issued a special commemorative coin in his honor.  In 2002, Cantor Malovany was appointed Honorary Chief Cantor of the City of Vilnius, Lithuania.  Previously, Cantor Malovany received the Cross of Merit – Commander of the Legion of Honor, from the President of the Republic of Poland, an honor that is equivalent to knighthood.  He also received a “Gold Record” from “Yuval,” Israel’s premiere ensemble of Jewish music, for his contribution to the “World of Jewish Music and the Cantorial Art.” He is the recipient of the prestigious 2007 “International Award for Tolerance” given by the government of Poland in conjunction with “UNESCO’s Day of Tolerance”.  In December 2009 Yeshiva University awarded Cantor Malovany with an honorary degree: Doctor of Humane Letters- Honoris Causa.  Cantor Malovany is the first cantor ever to receive an honorary doctorate from Yeshiva University.

Joseph Malovany has performed many times as soloist with the Israel Philharmonic Orchestra.  As tenor in Noam Sheriff’s monumental symphony, “Mechaye Hametim” (He Who Revives the Dead), he sang in its premiere with the Israel Philharmonic in Amsterdam in the presence of H.M. Queen Beatrix of Holland.  The piece was also performed throughout Europe and Israel with Joseph Malovany as the tenor soloist in each performance.  In January 1998 he was the soloist in Philadelphia at the American premiere of this symphony, with the combined orchestra consisting of the Israel Philharmonic Orchestra and the Philadelphia Orchestra under the baton of Maestro Zubin Mehta.  Over 20,000 people attended this event which officially opened the American year-long celebrations commemorating Israel’s Fiftieth Anniversary.  In May, 1998, he again performed with the Israel Philharmonic at the memorable concert in Yad-Vashem’s Warsaw Ghetto Square in Jerusalem.  He sang to thunderous ovation a Jewish High Holiday prayer at the concluding session of the United Nations International Summit Conference of Religious Leaders for World Peace.

Joseph Malovany, as a representative of world Jewry, has performed at Join Sessions of Congress in the Capitol Rotunda in Washington DC and at many major events on behalf of the State of Israel.  He has toured extensively Russia and the former Soviet Union with concerts in Moscow, St. Petersburg – Tallinn Estornia, Tashkent – Uzbekistan, Vilnius – Lithuania and other centers.  The year 2005 saw Cantor Malovany sing in two of the most historic events of our time.  On January 27th he chanted the memorial prayer for the victims of the Holocaust commemorating the 60th anniversary of the liberation of Auschwitz-Birkenau at an outdoor ceremony in Auschwitz attended by all European Heads of State, including royalties, presidents, prime ministers, etc.  In May he sang in Berlin, Germany a program of liturgical music accompanied by the German-Polish Youth Symphony Orchestra at the ceremony to inaugurate the monument for the Holocaust in that city.  He also preformed the memorial prayer at the Warsaw ghetto uprising’s 65th anniversary in front of the monument attended in Warsaw streets by one million people.

He has performed at Tel Aviv’s Mann Auditorium, Jerusalem’s National Building, Amsterdam’s Royal Opera House, London’s Royal Festival and Queen Elizabeth Halls and Barbican Center, Lincoln Center’s Avery Fisher and Alice Tully Halls in New York, the Core State Center in Philadelphia and Brussels Palace of Fine Arts.  He also sang in Paris’s music center “Cite de la Musique” in La Villete and the “UNESCO” Hall in Paris, the Gotteborg Philharmonic Hall in Sweden.  His Eastern European performances have been staged at Moscow’s famed Tchaikowsky Hall and the Bolshoi Hall of the Conservatory of Music, Budapest’s Philharmonic and Vigado Halls, the Bucharest Opera House, Warsaw’s Philharmonic Hall and The Royal Palace, the Vilnius Opera House and its Fiharmonia Hall, Riga, Latvia’s Opera House, the Prague Rudolfinum Hall and the Prague Castle, the Oslo Philharmonic Hall and Copenhagen’s Tivoli Hall.  He also sang in the famed synagogues in Szeged and the “Dohany” in Budapest, Hungary – the Pilszan synagogue in Bohemia and in the “Temple” synagogue of Krakow, Poland, and the Opera House of Skopje, Macedonia with its Philharmonic Orchestra.  Joseph Malovany has concertized extensively with performances at Sao Paulo’s Teatro Cultura Artistica, the Herodion Amphitheater near Bethlehem.  His performances in Spain include appearances in Toledo and in the opera house of Santander.

Consistent with his deep musicianship, Joseph Malovany is called upon to premiere contemporary works.  He sang at the premiere of Israeli composer Andre Hajdu’s cantata “Tz’ror Hachayim” (The Cycle of Life) in New York, Miami and Tel Aviv, and in 1997, Joseph Malovany performed the tenor role in the premieres of Jan Radzinski’s “Shirat Ma’ayan” (The Song of the Well) and Anatoljus Senderovas’s “Sh’ma Yisrael” (Here O’ Israel).  In July of the same year he performed in the premier of his own musical composition to the text of Israel’s Declaration of Independence in honor it its fiftieth anniversary that took place in the Knesset (Israel’s Parliament).  In May 2010 Joseph Malovany was the featured soloist in the performance of the internationally famous Polish composer Krzysztof Penderecki’s Oratorio “Kaddish” conducted by the composer, at the rededication of the Great Synagogue “White Stork” in Wroclaw, Poland.

Joseph Malovany has produced more then 15 compact disks and DVD’s of his performances throughout the world.  His hundreds of TV, radio, newspapers and magazines performances and interviews have served to enhance his unique and distinguished reputation as a world authority and a profound exponent and spokesman of his profession and calling.

This tall, statuesque and genuine cantor and singer, brings much dignity, beauty and warmth with his rare quality, crystal-like tenor voice.  World leading music critics have hailed his performances as “thrilling”, “profoundly moving”, “unmatched”, “spellbound”, and “warmth with consummate artistry”.  One commentator in a local newspaper described Joseph Malovany as “The Jewish Court Singer of New York” and a Toronto newspaper called him “The Pavarotti of the synagogue.”