Connie Francis and Leaonard A. Wilf are Honored by the Friars Club

You are here: Home / Arts & Leisure / Connie Francis and Leaonard A. Wilf are Honored by the Friars Club

Listen to “Connie Francis and Leaonard A. Wilf are Honored by the Friars Club Part 1” on Spreaker.

Listen to “Connie Francis and Leaonard A. Wilf are Honored by the Friars Club Part 2” on Spreaker. 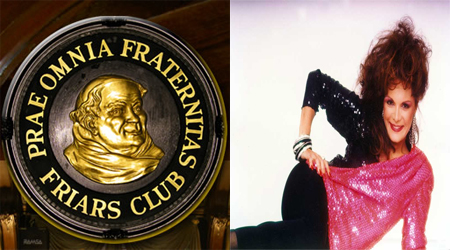 Leading Businessman and Philanthropist Leonard A. Wilf at Annual Gala!

WHERE: The Waldorf Astoria Hotel, 301 Park Avenue (at 50th street),NYC

A WORD ABOUT THE FRIARS FOUNDATION

Whether we experience the thrill of a live performance or the delight of listening to a great symphony, we know how much power the arts have in changing society.

The Friars Foundation was established in 1977 as the charitable arm of the Friars Club. It is a publicly supported Foundation and is the conduit through which the Friars accomplish one of its major goals: the betterment of our society, particularly in the area of the performing arts.

The mission of the Friars Foundation is to help performing arts groups create excellent innovative and affordable programs for the enrichment, education, and enjoyment of diverse audiences and participants. The Foundation also helps prepare the next generation of performers and musical artists through scholarship programs for students studying the performing arts.

With the decrease in government subsidy for the performing arts the Friars Foundation is more than ever aggressively seeking to carry out its mission to foster the arts for future generations.

* Abbot Frank Sinatra once said: “Their continuous good work for charity rather than their great triumphs on the stages of the world is the true glory of this band of earthly angels known as the Friars.”