The 75th Anniversary of the Apollo Theatre

You are here: Home / Arts & Leisure / The 75th Anniversary of the Apollo Theatre

Listen to “The 75th Anniversary of the Apollo Theatre” on Spreaker. 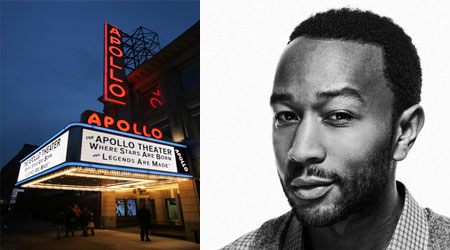 John Legend performs at the 75thAnniversary of the Apollo in Harlem, New York.  Good News celebrates the occasion.  ….Did you know that John Legend’s last name is not Legend?  He told GoodNews at a Hamptons Magazine Cover Partyfor him,   that his buddies used to call him Legend because he sang like an old man to them – hence he was a Legend! We guess the name hasn’t hurt him!

the Apollo probably exerted a greater influence upon popular culture than any other entertainment venue in the world. For blacks it was the most important cultural institution–not just the greatest black theatre, but a special place to come of age emotionally, professionally, socially, and politically. Ted Fox, “Showtime at the Apollo”

John Legend has sold more than five million albums worldwide, garnered multiple hit singles: “Ordinary People,” “Used to Love U,” “So High,” “Save Room,” “Heaven,” “Another Again” and received countless awards, including five Grammy’s. Music’s leading producers clamor to work with him. Fashion aficionados can’t get enough of his incomparable style and the humanitarian community has rallied around his fight to end poverty. Critics have called him a genius, one of the most compelling and important singer/songwriters of this generation, an elegant ambassador of soul. A favorite of Apollo audiences, Legend was the first artist to appear on the Apollo’s Heineken New Legends Series. “We are thrilled to welcome John back to the Apollo. He is truly part of our incredible legacy, and his concert is sure to be a highlight of our 75th Anniversary season,” said Jonelle Procope, President & CEO of the Apollo Theater Foundation, Inc. With all of the acclaim, it would be easy for John Legend to rest on his laurels, but he continues to push himself, always striving to break new musical ground.

About the Apollo Theater:

Since introducing the first Amateur Night contests in 1934, the Apollo Theater has played a major role in the emergence of innovative musical genres including jazz, swing, bebop, R&B, gospel, blues, soul and hip-hop. Ella Fitzgerald, Sarah Vaughan, Billie Holiday, Sammy Davis, Jr., James Brown, Bill Cosby, Gladys Knight, Luther Vandross, D’Angelo, Lauryn Hill, and countless others began their road to stardom on the Apollo’s stage. Based on its cultural significance and architecture, the Apollo Theater received state and city landmark designation in 1983 and is listed on the National Register of Historic Places. The Apollo Theater Foundation was established as a 501 (c) 3 not-for-profit corporation in 1991 and is dedicated to the preservation and development of the Apollo Theater. The historic venue hosts major concerts and special events and continues its tradition of discovering future stars with its weekly installment of Apollo Amateur Night every Wednesday night. Harlem is Manhattan’s third most popular tourist destination and the Apollo remains Harlem’s top attraction, drawing 1.3 million visitors annually.

The world famous Apollo Theater, “where stars are born and legends are made” is located in the heart of Harlem at 253 West 125 Street, between Adam Clayton Powell Blvd (7th Ave.) and Frederick Douglass Blvd (8th Ave.). For further information about the Apollo Theater, visit the website at www.apollotheater.org

Previous Post: « A Thought for the New Year
Next Post: Connie Francis and Leaonard A. Wilf are Honored by the Friars Club »