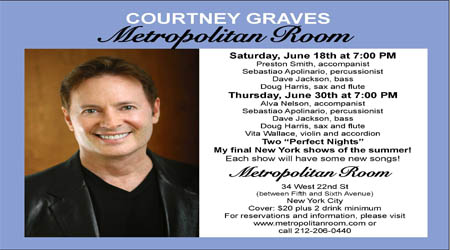 After performing earlier this season in New York, Los Angeles, and Palm Springs, Court Graves is excited to bring “My Perfect Night” back for his debut at the Metropolitan Room. The show includes reimagined versions of standards by Sammy Cahn and others of the Great American Songbook, while Suzanne Vega, Duffy, and other contemporary writers add to the mix. Court is in the process of recording a CD of this show, to be produced by well-known Los Angeles composer/arranger Bill Brendle.
Court Graves’ original idea was to record an album of standards, but he wanted to put a different spin on them. He decided to pursue a Brazilian influence, and thus sought out Bill Brendle. He brought many of his favorite songs to Bill, and they chose the ones that would lend themselves to the many Brazilian rhythms that they both knew so well. Bill Brendle incorporated many different windows into the music of Brazil: from Bahia parade rhythms in “This Could Be the Start of Something,” to Rio Carnivale and Frevo on “Too Close for Comfort,” to Brazilian tango on “Caramel,” to classic samba on “Night Song.”

Every song chosen connects with Court on some level — lyrically and musically. They are connected with some part of his personality or experience, and some were originally recorded by two of his favorite singers, Dinah Washington and Sammy Davis, Jr., whose unique vocal arrangements influenced Court and Bill’s decision to include them in this show.
Accompanying Court on June 30 the accompanists will be Alva Nelson, pianist; Sebastiao Apolinario, percussionist; Chris Sullivan, bass; Doug Harris, sax and flute; and Vita Wallace, violin and accordion.

Court was very fortunate to attend Marilyn Maye’s workshop and also an individual session. It was a reunion for Court and Marilyn as they are both from Kansas and Marilyn was a family friend there.