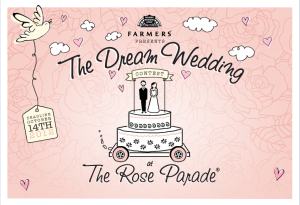 The couple, selected by America through a public vote in the first-ever national contest of its kind, in front of over 52 million television viewers and another 900,000 people at the Rose Parade® as the float glides down Colorado Boulevard. Nicole and Gerald captured the hearts of the American public and won their votes during the Farmers Insurance Dream Wedding Contest with their fated love story in which the former high school classmates reconnected later in life to find true love together.

As winners of the Dream Wedding contest, the happy couple received a trip to Pasadena, CA for themselves and six witnesses, who will watch them get married on the Farmers Insurance “Love Float.” The bride and groom have also been provided with a beautiful wedding gown from David’s Bridal, a tuxedo from Men’s Wearhouse®, his and hers wedding rings, hair and make-up for the bride, and marriage license fees.

The newlyweds will celebrate their wedding day immediately by attending a celebratory parade after party, the 2013 Rose Bowl game, and will also have the opportunity to participate in a national advertisement featuring a wedding photo. Visit www.Facebook.com/FarmersInsurance or www.Farmers.com/LoveFloat to learn more about the Dream Wedding and check local broadcast listings to tune in and watch the live nuptials on “The Love Float.”