You are here: Home / All We Need Is Love / Religion and Spirituality / African Trad. Diaspora / Happy Kwanzaa 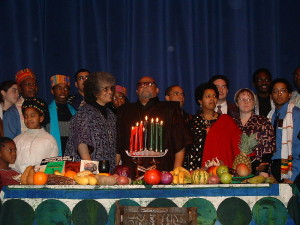 Kwanzaa is a week-long celebration held in the United States (and, more recently, Canada) but also celebrated in the Western African Diaspora. The celebration honors African heritage in African-American culture, and is observed from December 26 to January 1, culminating in a feast and gift-giving. Kwanzaa has seven core principles (Nguzo Saba): Unity, self-determination, collective work and responsibility, cooperative economics, purpose, creativity, and faith. It was created by Maulana Karenga, and was first celebrated in 1966–67.

Maulana Karenga created Kwanzaa in 1966 as the first specifically African-American holiday. Karenga said his goal was to “give Blacks an alternative to the existing holiday and give Blacks an opportunity to celebrate themselves and their history, rather than simply imitate the practice of the dominant society.”[citation needed]The name Kwanzaa derives from the Swahili phrase matunda ya kwanza, meaning first fruits of the harvest.[citation needed] The choice of Swahili, an East African language, reflects its status as a symbol of Pan-Africanism, especially in the 1960s, despite the fact that most East African nations were not involved in the Atlantic slave trade that brought African people to America.
Kwanzaa was a celebration that has its roots in the black nationalist movement of the 1960s, and was established as a means to help African Americans reconnect with their African cultural and historical heritage by uniting in meditation and study of African traditions and Nguzu Saba, the “seven principles of African Heritage” which Karenga said “is a communitarian African philosophy”.
During the early years of Kwanzaa, Karenga said that it was meant to be an alternative to Christmas, that Jesus was psychotic, and that Christianity was a white religion which black people should shun. However, as Kwanzaa gained mainstream adherents, Karenga altered his position so that practicing Christians would not be alienated, then stating in the 1997 Kwanzaa: A Celebration of Family, Community, and Culture, “Kwanzaa was not created to give people an alternative to their own religion or religious holiday.”
Many Christian African Americans who celebrate Kwanzaa do so in addition to observing Christmas.

Kwanzaa symbols include a decorative mat on which other symbols are placed, corn and other crops, a candle holder with seven candles, called a kinara, a communal cup for pouring libations, gifts, a poster of the seven principles, and a black, red, and green flag. The symbols were designed to convey the seven principles.