Frances West, Chief Accessibility Officer, IBM is interviewed by Consumer Technology Association in Las Vegas at CES, IBM is doing important work, especially for IBM’s role in the next phase of the Internet of Things (IoT): cognitive computing. 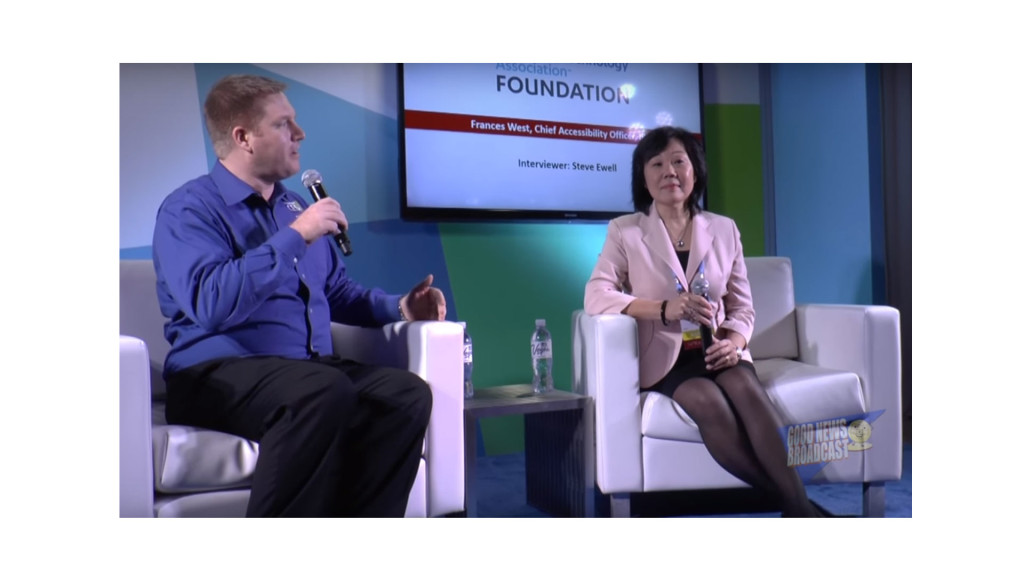 Ginni Rometty, chairman, president and CEO of IBM, concluded Wednesday’s keynote lineup discussing IBM’s role in the next phase of the Internet of Things (IoT): cognitive computing. She said the challenge of IoT today is making sense of all the data we’re creating and capturing. “The future of the Internet of Things is cognitive,” Rometty said. “It will change what you make, it will change how you operate, and will change who you are.” Rometty announced partnerships with Under Armour, Medtronic and Softbank Robotics, who are all using Watson, IBM’s computing power technology that makes sense of data generated by connected devices.

Shapiro opened IBM’s keynote by announcing a research partnership between the CTA Foundation and IBM to study how cognitive computing will transform our lives as we age and transform the lives of those living with disabilities.

We hear from Frances West, Chief Accessibility Officer, IBM
In this role, Frances works to establish IT accessibility standards, shape government policies, and develop human-centric technology and industry solutions that not only create an inclusive workplace environment but are designed to personalize the user experience so that all people reach their highest potential in work and life.
In addition to advising clients on best practices in accessibility, Frances ensures IBM is placing accessibility at the center of design and development to improve everyone’s information consumption patterns, including people with disabilities, the aging population, novice technology users, people with language, learning and literacy challenges, or any individual facing situational challenges while using a device.
Since joining IBM Research to lead the IBM Human Ability and Accessibility Center, Frances has become a globally-recognized expert in enabling human ability through accessible information and communications technology (ICT). She has worked to reshape the perception, definition, and value proposition of accessibility to be relevant to all people, all situations and at all times. She has served on the Board of Directors for numerous advocacy organizations, including the American Association of People with Disabilities, the Assistive Technology Industry Association and the U.S. Business Leadership Network. She currently sits on the Board of Directors of the World Institute on Disability, is the board advisor to the National Business & Disability Council, and is a Founding Member and Program Co-Chair of G3ict, an advocacy initiative launched by the United Nations Global Alliance for ICT and development in 2006.
Frances has become a sought-after authority on the topic of global ICT accessibility trends and enablement. In 2010, she delivered remarks at policy forums hosted by the United Nation’s Global Initiative for Inclusive Information and Communications Technologies; a U.S. Department of Labor, Office of Disability Employment Policy roundtable; and an international forum hosted by the São Paulo State Secretariat for the Rights of Persons with Disabilities in Brazil. She has also testified on behalf of the IT industry to the U.S. Senate Committee on Foreign Relations in support of the ratification of the Convention on the Rights of Persons with Disabilities.
Since joining IBM, Frances has held numerous management positions across the IBM sales and marketing organizations, including the Business Unit Executive of the Banking, Financial Services, Securities and Insurance Unit for the IBM Greater China Group, and the Director of Financial Services Sector Solutions for IBM Global Services, where she managed investment funding and executed financial services solution plans for banking, insurance and financial markets. Frances was also director of Channels, Alliances and Business Development for IBM Lotus Software, where she recruited and managed IBM’s global network of Business Partners specializing in Lotus software.
Frances attended the Chinese University of Hong Kong, Washington & Lee University in Virginia and graduated with a marketing degree from the University of Kentucky. In 2011, she received an Honorary Doctor of Science degree from the University of Massachusetts Boston.