You are here: Home / Communities / Americas / Good News Family has a great day on the LazyBones charter boat on Montauk New York 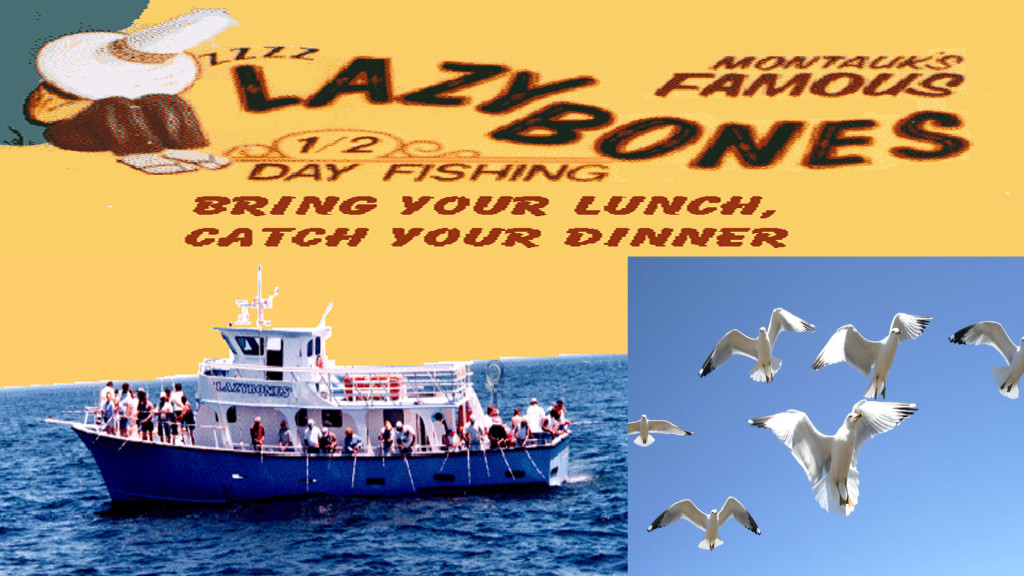 Picture a young surfer dude wandering around a dock lined with charter boats. A grizzled old captain yells out, “Hey, kid, you want a job ?” That was exactly how Captain Mike Vegessi got his start in Montauk fishing in 1977. He had never been fishing before and was drawn to Montauk for the surfing, not the surf casting. The grizzled old captain was Doug McCabe of the “FRANCES ANNE”, nearing the end of his career as one of Montauk’s offshore pioneers, and Mike would be his mate for the next three years. In addition to learning the fishing business, Doug, who also owned a diesel parts business catering to the fishing boats in Montauk, taught Mike all he needed to know about the maintenance of diesel powered boats.
Doug retired in 1979, and the next year Mike went to work as a mate for another Montauk legend, Captain George McTurck, owner of the “SPORTFISHER”. While with George, Mike passed his captains test, and eventually took over the operation of the boat on all offshore trips. George would continue to run the boat for the inshore trips, and it was from George that Mike would learn about Montauk’s tides.
Other than well experienced fishermen, few people realize the complexities of the tidal system here in Montauk. You can be anchored on one spot with the outgoing tide, while a mile away others are anchored with the flood tide, and will be for another half hour or so. The single most important factor in inshore fishing is the tide, and Captain McTurck was and still is the acknowledged master. However, his protege, Mike Vegessi is an extremely close second.
During the winters Mike would work on one of the many commercial boats fishing out of the harbor, a tough racket. The weather is rough, but the winter is when most of the money is made in commercial fishing. Offshore there are plenty of fish, and the prices are high. One year he would fish a dragger, for porgies, whiting or fluke. The next he’d be on a longliner after tilefish or cod fish.
However, nobody wants to stay a mate forever, and when Captain Bill Butler put the “CAPTAIN WILLIE” up for sale in 1985, Mike jumped on it. The boat, 50′ long and wooden was operated as a party or open boat and already had a client base. When Mike took over, he changed the rules. Half day only – flounders in the spring, followed by fluke in the summer and bass and blues in the fall. The targeted audience was families, fishing in calm protected waters. He renamed the boat “LAZYBONES”, and did away with leaving the dock at daybreak.
In 1997, Mike retired the old LAZYBONES and purchased a new one, a 55′ Bruno & Stillman, a fiberglass boat. and a big improvement over the aging original boat. Bigger, roomier, and most of all, not needing the amount of maintenance requird of a wooden boat, the new LAZYBONES has proved to be a welcome addition to Montauk’s open boat fleet.
It is now one of the most popular boats in town, and is truly a family affair. Mike runs it, while his wife Kathy is in charge of the money. She sells the tickets and makes sure that the motels are stocked up on their brochures. It’s a good system, one that keeps the boat sailing full while larger fancier boats are lucky to sail with twenty percent of their capacity.
(from MONTAUK SPORTFISHING – 1996)
THE GIRLS