Good News thanks Isaiah for being such an inspiration.

You are here: Home / Good News To Go / Good News thanks Isaiah for being such an inspiration. 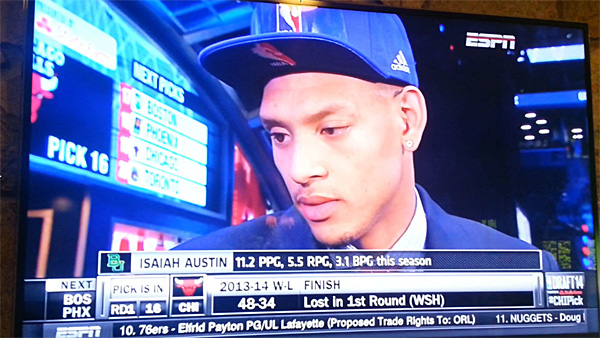 Isaiah Charles Austin (born October 25, 1993) is an American basketball player who recently completed his college career for the Baylor Bears. He had been considered a first-round prospect in the 2014 NBA draft until he was diagnosed with Marfan syndrome. On June 26, 2014, between the 15th and 16th picks of the 2014 draft, Commissioner Adam Silver made Austin a ceremonial pick, which fulfilled his dream of getting drafted. The crowd gave him a standing ovation as he walked up to the podium.

Thanks to ESPN for broadcasting the draft and the NBA for doing such a honorable gesture.

Special thanks to Isaiah for inspiring so many with your positive conviction for making the most out of  our lives.

Austin was born October 25, 1993 in Fresno, California to Ben and Lisa Green. His family later moved to Arlington, Texas where he grew up and attended Grace Preparatory Academy.

Austin attended Grace Preparatory Academy. As a senior, he averaged 15 points, 11 rebounds, and 5 blocks a game. This lead him to his second straight Fort Worth Star-Telegram Super Team Player of the Year. Austin participated in the 2012 McDonald’s All-American Game, 2012 Adidas Nations and the 2012 Jordan Brand Classic. In the McDonalds All-American Game, he recorded 10 points, 8 rebounds, 3 blocks and 2 assists to lead the West to victory. In the Jordan Brand Classic, he recorded 10 points, 8 rebounds, 3 steals and 2 blocks to again lead the West to victory. He was named to the ESPNHS All-American Elite second team and was the nations no. 3 recruit according to ESPN.

In April 2013, he declared for the 2013 NBA draft, but later returned to Baylor due to a shoulder injury.

On April 22, 2014, he declared for the 2014 NBA draft, forgoing his final two years of college eligibility.

On June 21, 2014, Austin learned that he had been diagnosed with Marfan syndrome, a genetic disorder that affects the body’s connective tissue. In an emotional interview with ESPN‘s Holly Rowe, Austin said that he could no longer play basketball at a competitive level since there was too much risk of his heart rupturing. In response, NBA commissioner Adam Silver invited Austin to attend the draft as his guest. Shortly after Austin’s diagnosis was made public, his agent revealed that Austin had taken out an insurance policy against career-ending disability through a special NCAA program. The amount of the policy was not disclosed, but the agent stated that it was at least $1 million. The policy would not have paid out if his career had ended due to the aforementioned shoulder injury or his eyesight, but is expected to pay out due to his Marfan diagnosis.

Austin is blind in his right eye from an injury he sustained in middle school. He had kept the injury a secret, known only to his teammates and close friends until January 17, 2014.

Earth Anthem
Next Post: How One Shoe Can Change a Family Picture?