“Jerry Nadler not only represents New York well, but he has represented the United States very well.”

You are here: Home / Good News To Go / “Jerry Nadler not only represents New York well, but he has represented the United States very well.” 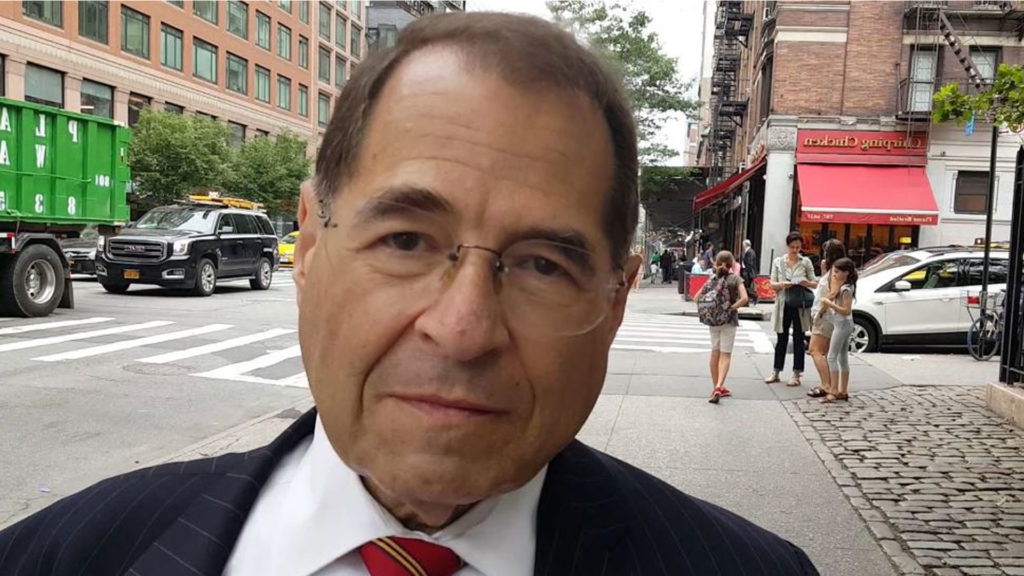 “Jerry Nadler not only represents New York well, but he has represented the United States very well.”
— President Bill Clinton, 42nd President of the United States
Congressman Jerrold “Jerry” Nadler represents New York’s 10th Congressional District, one of the most dynamic and diverse districts in the country. The district includes Manhattan’s Upper West Side, Morningside Heights, Hell’s Kitchen, Chelsea, Greenwich Village, Soho, Wall Street, and Battery Park City, as well as the Brooklyn neighborhoods of Borough Park, Kensington, and parts of Bay Ridge, Bensonhurst, Dyker Heights, Red Hook, Sunset Park and Midwood.
Rep. Nadler began his career in public service in 1976 in the New York State Assembly. Representing the Upper West Side, he served as a Democratic Assemblyman for 16 years and played a significant role in shaping New York State law concerning child support enforcement and domestic abuse, as well as making major contributions to housing, transportation and consumer protection policy in the state. In 1992, Rep. Nadler was elected to the U.S. House of Representatives in a special election and has served in Congress ever since. He was re-elected to his twelfth full term in 2014, receiving a resounding 88% of the vote.

The second-most senior member on the House Judiciary Committee, Congressman Nadler served as Chairman or Ranking Member of its Subcommittee on the Constitution, Civil Rights, and Civil Liberties for 13 years and now serves as the Ranking Member of the Subcommittee on Courts, Intellectual Property, and the Internet. He is also the highest-ranking Northeastern member of the House Transportation and Infrastructure Committee, and serves as an Assistant Democratic Whip.

Rep. Nadler is a graduate of Crown Heights Yeshiva, Stuyvesant High School, Columbia University and Fordham Law School. He lives on the Upper West Side of Manhattan with his wife, Joyce Miller. They have one son, Michael.

“Jerry Nadler is a staunch defender of civil rights and civil liberties in America, and a passionate advocate for these issues in Congress.”
— Representative John Lewis (D-GA), Civil Rights leader

For over 30 years, in both the House and in the New York State Assembly, Congressman Nadler has proudly been on the front lines in the fight for civil rights, and has been a relentless defender of our country’s fundamental promise of equality for all. Central among his concerns has been the ongoing civil rights struggle for people of color. Rep. Nadler has been a leader in the fight to protect voting rights and reduce voter disenfranchisement. He served as a key House leader behind the reauthorization of theVoting Rights Act, continuing to serve on the small House working group directing its advancement, and held oversight hearings on Department of Justice efforts to combat voter suppression. He also has worked vigorously to call attention and seek remedies to past and present racial injustices. Rep. Nadler was an original co-sponsor of the Pigford Claims Remedy Act of 2007 (H.R. 3073), and held a landmark Judiciary subcommittee hearing on the Pigford case, which involved thousands of African-American farmers who suffered discrimination at the hands of the Department of Agriculture for most of the 20thcentury. He also championed the Emmett Till Unsolved Civil Rights Crime Act, which he ushered through to a decisive House victory.
Congressman Nadler has also taken an active role in working against discriminatory racial profiling by law enforcement, co-sponsoring the End Racial Profiling Act among other actions, and has devoted considerable time as a senior Member of the House Judiciary Committee to monitoring and reinforcing voting rights for African-Americans and other groups that have been systematically disenfranchised. He was one of the first to call for a Justice Department investigation in 2000 of Mayor Giuliani and then-NYPD Commissioner Howard Safir after three separate fatal shootings involving three unarmed New Yorkers—Patrick Dorismond, Amadou Diallo, and Gideon Busch—and was an outspoken advocate for justice in the deaths of Michael Brown and Eric Garner in 2014. In his district, Rep. Nadler successfully worked to create the African Burial Ground National Historic Site in Lower Manhattan, recognizing the landmark 17th and 18th century African burial ground discovered there.