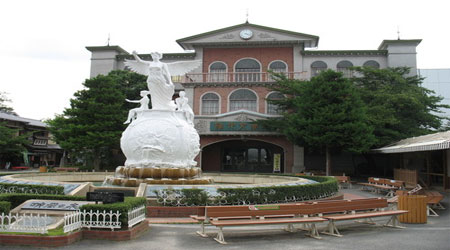 The Toei Uzumasa Eigamura, popularly known as Kyoto Studio Park, is located in Ukyo Ward of Kyoto City. Being the home of Japanese film industry, Kyoto Studio Park is often referred to as the Hollywood of Japan. The park is a combination of a theme park and the film set of Toei Movie Land. Here you will find the models of traditional Japanese monuments and buildings that are used in shooting for television dramas and historical movies of Japan. Discover yourself in the Edo period, as you walk down the streets and get the feel of the bygone times. If you’re lucky enough, you may well catch a glimpse of a movie sequence being shot. Check out the television-based exhibitions, the haunted house and the Cinema Cultural Hall, where you can enjoy various shows on the different aspects of Japanese cinema. The wonderful replicas of a police box of the Meiji period, the old Nihonbashi Bridge, red light areas of Yoshiwara and the traditional court house, all are worth looking at.

After exploring the various corners of this Kyoto amusement park, you might feel like getting photographed in the unique Japanese attires or the kingly attires of the Edo era. Take your pick from more than 30 different attires like ninja, geisha and samurai attires. The cost of the attire ranges from about 8500 to 16000 Yen. And if you want to go back home with some sweet memories, you can always collect some souvenir from the numerous souvenir shops.

You can reach this park via train routes. Spare 200 yens to get to Uzumasa Station from Arashiyama or Shijo-Omiya. It hardly takes ten minutes. The Kyoto Studio Park is within a five-minutes walking distance from the Uzumasa Station. On the other hand, you can catch a train from Kyoto Station and get down at JR Hanazono. Walk for about 15 minutes and you’re there. Bus service is also offered from Kyoto Station as Bus 71, 72, 73 or Kyoto City Bus 75 takes you to Kyoto Studio Park within 30 minutes.

The park is opens at 9 o’ clock in the morning and closes at 5pm. Though from December to February, it changes to a 9-30am to 4pm. Tickets are valued at 2200 Yen. There are discounted tickets for students and children. The park remains closed on the last week of a year.