Li Qiang, a famous Chinese painter who styled himself as “Changchun”, “Yinbin Bi Ke” and “People of Henan Luoyang”.

You are here: Home / Arts & Leisure / Design, Art and Fashion / Li Qiang, a famous Chinese painter who styled himself as “Changchun”, “Yinbin Bi Ke” and “People of Henan Luoyang”. 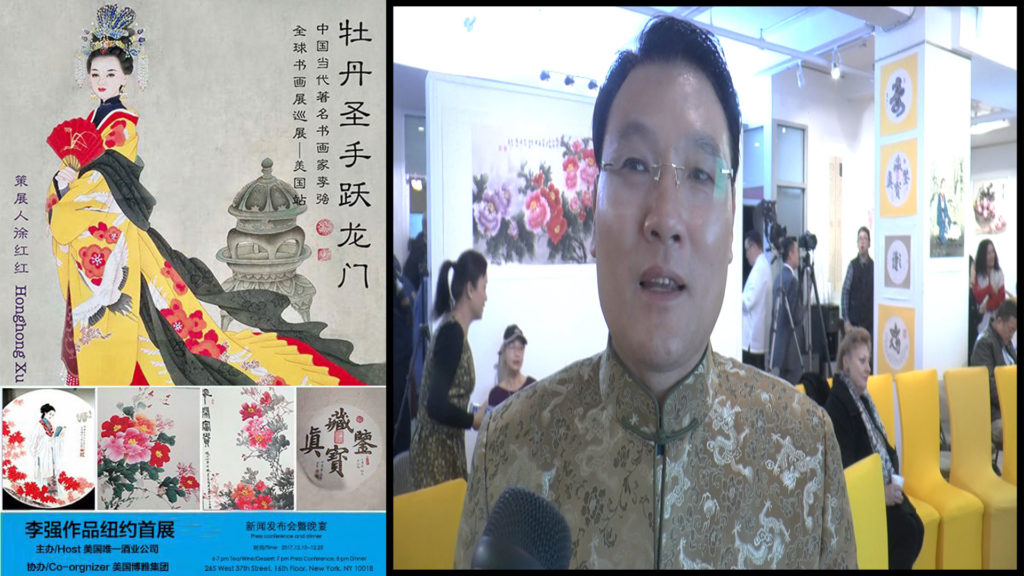 Born in a scholarly family, Mr. Li started learning Chinese traditional calligraphy from his grandfather when he was six years old. Over the course of 50 years, he poured his heart into Chinese traditional calligraphy and never stopped perfecting his skills. He is the one and only Chinese calligrapher who can use formal script, cursive script, official script, Jinming script, Dazuan script, Xiaozuan script, running script and Weibei script to write Chinese character. Among them, official script and running script are his specialties. Mr. Li pioneered Pu’er calligraphy and it’s famous for its vintage appeal, long lasting aroma and perfect combination of calligraphy and tea ceremony. It is the first of its kind and worthy of appreciation and collection.
The main themes of Mr. Li’s paintings include flowers, birds and people portraits; among the themes, his Chinese painting of peony is the most spectacular. He paints the flower with wonderful accuracy of observation so that his paintings vividly present the radiant and graceful nature of the peony. If you are fortunate to appreciate the painting in person, it carries you back in time to the Luoyang peony wonderland and it truly is a rare experience. That’s why Mr. Li is known as “Peony Master” home and abroad.
Mr Li’s portrait painting of beautiful traditional Chinese lady is also a masterpiece. The aesthetics of the painting tranquilizes you with its gracefully gorgeousness and make you lost in your reverie. The painting was collected by an English Duke and he fell in love with China because of it. Interestingly, he even told Mr. Li that he must find someone that looks like the one in the painting in reality.
Since 2008, Mr. Li’s artworks were exhibited in Belgium, Hong Kong, Taiwan and in touring exhibitions across Mainland China. To encourage cultural exchanges, Mr. Li was invited to London in December 2011 to hold an exhibition. His artworks were well-received by the British royal family, celebrities, artists, Chinese Ambassador of United Kingdom and people who love art. Most of them were sold on the spot and among them; the portrait panting of a traditional Chinese lady grabbed a handsome amount of £80,000 ($125,000). Some of them were even collected by the Cambridge University Museum and himself and the Vice President of Cambridge University and Dean of Trinity College, Dr. Martin Rees, also put a few Mr. Li’s artworks into his own personal collection.
With his passion about Chinese traditional culture and his charisma as an orient artist, Li Qiang devotes himself to become a bridge connection that facilities East-West cultural exchange.
Titles
• Founder and Principle Wuhan Arts and Crafts School (Founded in 1984)
• Honorary President of Guangdong Province Patriotic Association
• Research director of Cantonese Merchants’ Painting and Calligraphy Research Institute of Guangdong.
• One of the top ten Chinese artists who is excellent in both performing skills and moral integrity
• Vice President of World Federation of Artists Association and President of Shenzhen-Hong Kong branch
• Academician of Chinese Painting and Calligraphy Institute
• Vice director of editorial department of Art News of China Magazine
• Vice President of World Lee Clan Association and President of Chinese Lee Clan Association