You are here: Home / Living & Learning / Environment and Nature / Lightning!

Lightning is an atmosph 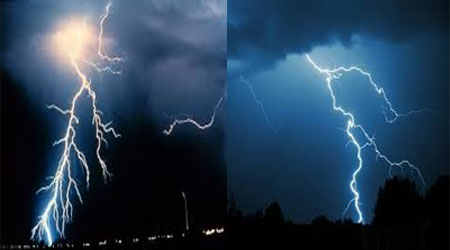 eric electrical discharge (spark) accompanied by thunder, usually associated with and produced by cumulonimbus clouds, but also occurring during volcanic eruptions or in dust storms.[1] From this discharge of atmospheric electricity, a leader of a bolt of lightning can travel at speeds of 220,000 km/h (140,000 mph), and can reach temperatures of about 30,000 °C (54,000 °F), hot enough to fuse silica sand into glass channels known as fulgurites, which are normally hollow and can extend as much as several meters into the ground.[2][3]

There are some 16 million lightning storms in the world every year. Lightning causes ionisation in the air through which it travels, leading to the formation of nitric oxide and ultimately, nitric acid, of benefit to plant life below.

Lightning can also occur within the ash clouds from volcanic eruptions, or can be caused by violent forest fires which generate sufficient dust to create a static charge.

How lightning initially forms is still a matter of debate. Scientists have studied root causes ranging from atmospheric perturbations (wind, humidity, friction, and atmospheric pressure) to the impact of solar wind and accumulation of charged solar particles. Ice inside a cloud is thought to be a key element in lightning development, and may cause a forcible separation of positive and negative charges within the cloud, thus assisting in the formation of lightning.