You are here: Home / Good News To Go / Surviving a RipTide 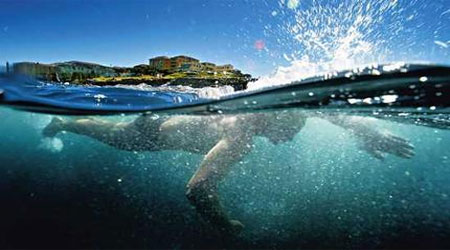 Hapless victims tend to wear themselves out by fighting the rip current by swimming to the shore: remember, swim to the side to escape the tide, which is relatively narrow.

Don’t be ashamed to ask for help. If uncertain how to react while in a rip current and a beach lifeguard is nearby, wave at them. It is important to wave with both hands, the universal sign of swimmer’s distress. Beach lifeguards have experience and training with rip currents and are there to help you out.

An undertow or rip tide is the same thing as a rip current. Rip current is the most accurate description of the phenomenon. The term undertow, in particular, is misleading: rip currents drag people out to sea, but they don’t drag them underwater.

Rip currents deserve respect, but you needn’t fear them. Lifeguards sometimes intentionally swim in them to quickly reach someone beyond the surf, and surfers find them useful to easily get out to catch waves. Lifeguards and surfers, of course, are very proficient swimmers and have experience swimming in surf conditions, so most of us shouldn’t intentionally enter a rip current. That said, if you do get caught in one, remain calm