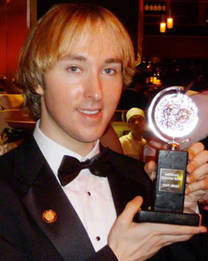 Charting Recording Artist. Michael is currently producing An American In

American In Paris at the Theatre du Chatelet in Paris. Michael has won the

and has received 25 Tony nominations. Michael is currently an Executive

on NJTV/PBS. He also produced several charity events/concerts including

From Broadway with Love: A Benefit Concert for Sandy Hook and the 2013 &

2014 Habitat for Humanity Galas honoring President Jimmy Carter. As a

performed all over the world including several performances at the legendary Grand Ole Opry. Michael

graduated from UCLA, went on to earn a master in business administration (MBA) and is honored to be

nominated for an Emmy® Award tonight.