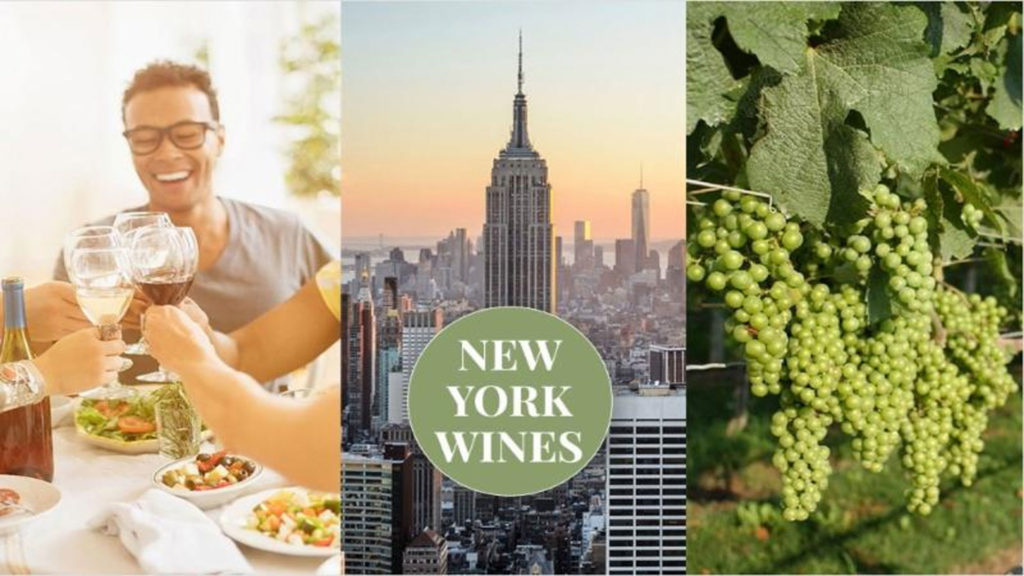 This week we hosted our 7th annual Finger Lakes Cellar Visits as part of the New York Drinks New York program, which is made possible through generous support from the Genesee Valley Regional Market Authority. The cellar visit connects trade and media from New York City to participating wineries from the Finger Lakes. The participants on this visit included Morgan Harris of Aureole, Ryan Totman of Corkbuzz, Nicolas Prieto of the Grand Hyatt New York, Ollie Sakhno of Keuka Kafe, Barbara Wong of The Modern, Jhonel Faelnar of The Nomad, Chelsea Carrier of Vinateria, and wine/travel writers Susan Gordon and Kat Odell.

Their tour included visits to 12 participating wineries on Seneca and Keuka Lakes, and intimate conversations over lunches and dinners featuring food sourced from the Finger Lakes with eight other participating wineries. Ruth and Scott Osborn of Fox Run Vineyards hosted dinner on Monday night with a six course meal made by Chef Brud Holland, Board Member of the Finger Lakes Culinary Bounty and Fox Run Vineyards Chef. Eric Asimov noted during his visit to the Finger Lakes in November that what makes New York wines great is their food friendliness. We endeavor through the NY Drinks NY program to strengthen the connection between local agricultural products and the wine industry. To that end, Chef Brud made a special puff pastry for dessert that featured a maple bourbon drizzle from Merle Maple Farm paired with a blue cheese from Muranda Cheese.

Several participating wineries used the visit to show off their Saperavi varietals, a grape variety native to the country of Georgia. Dr. Konstantin Frank made one of the earliest plantings of Saperavi in the Finger Lakes in the 1960s, however for several decades wineries could not label their Saperavi wines using the varietal name. Then, Marti Macinski of Standing Stone Vineyards broke through with TTB in 2013 and convinced them to allow Saperavi to be labelled as Saperavi. Last week, we learned that McGregor Vineyards was the only winery to win three awards at first ever International Saperavi World Prize held in Tblisi, Georgia. This is a great example of a New York winery building the industry’s international reputation, so be sure to seek out the McGregor Vineyard Black Russian Red series and the many other Saperavis being produced by Finger Lakes wineries.

The NY Drinks NY program picks back up on March 20th for the 8th Annual Grand Tasting at the Altman Building in NYC. Trade and consumer tickets are now available. We hope to see you there.

Sam Filler, Executive Director
Industry News
There’s Nothing Wrong with Being a Little Sweet on Wine There’s a popular misconception about wine that dry is better than sweet. We love sugary sodas, sweet tea, sweet and sour chicken, sticky sweet barbecue sauces, cookies and cakes and more. And overtly sweet wines are popular, too, judging from sales figures. Yet there is still a perception that sweet wines are unsophisticated and somehow inferior to dry. They aren’t. They’re just different.
Traminette’s Popularity Spreads Across the East: How the white hybrid with vinifera-like quality
was developed and tested. Traminette, an aromatic grape related to Gewürztraminer, has become a popular variety in 19 states. First named in 1996 by the New York State Agricultural Experiment Station (NYSAES), the variety has experienced widespread growth from the East Coast to as far west as Missouri. It is very popular in New York’s Finger Lakes region and has been named Indiana’s “signature grape variety.”
The Causal Impact of Medals on Wine Producers Prices and the Gains From Participating in Contests Authors Emmanuel Paroissien & Michael Visser find a strong medal impact indicating that producers of medaled wines can increase their price by 13%. The impact for gold is much larger than for silver and bronze, but they cannot reject that the correlation with quality is the same across the three. Their profit calculations show that the incentives to participate in wine contests are high.

Reminder: Wine Competition Deadlines
In an effort to gain more recognition for the high-quality wines produced in New York State, the New York Wine & Grape Foundation assists wineries with the entry fees in national and international competitions. The matching ratio is currently 75% to 25% Winery to Foundation. Check our website for upcoming deadlines for entry and make sure you get your paperwork and payment into the office to allow adequate time for the payment to be sent.

New York in the News

Event to Showcase History of Long Island Wine Industry Through Photos On Wednesday, January 17, the Southold Historical Society will explore the rich history of Long Island wine during a gathering aimed at developing a visual essay illustrating the evolution of the East End wine industry from the early days to today. More than 50 photos will be selected for inclusion.
Waters Crest Winery Goes Members Only at Jason’s Vineyard A new year welcomes a new business model for two North Fork wineries. Waters Crest Winery’s Cutchogue tasting room has permanently closed in favor of a private room at a new location that will now cater solely to wine club members.”At this point, it’s a nice time to downsize,” said owner and winemaker Jim Waters, who opened his former Main Road location two years ago after operating for more than a decade on the North Road. “Our wine club is doing very well. That’s the focus. It’s more personal.”
Cornell Experts Lead Hands-on Summer Program in Grape Growing and Wine Making Wine enthusiasts can explore the science of growing grapes and making wine this summer at the Cornell University Viticulture and Enology Experience (CUVEE) in Ithaca, New York, from August 5 to 10, 2018. In this intensive program participants will work in the field and in the classroom, making and evaluating wines, and learning about key agricultural practices; the effects of climate and terroir on grape and wine flavors; the importance of microbiology to winemaking; and the business and marketing aspects of making and selling wine.

New York State’s Award Winning Wines…
The 2018 San Francisco Chronicle Wine Competition was held Tuesday through Friday last week, drawing 67 judges who sampled 6,960 wines from 35 states before crowning seven as the sweepstakes winners in their respective classes.
Congratulations to Merritt Estate Winery for its 2015 Lake Erie Vidal Ice Wine and Goose Watch Winery
for its Finger Lakes Flying High Semi-Sweet Cider, both were Sweepstakes winners at the competition! Congratulations are also in order for Keuka Spring Vineyards‘ 2016 Vignoles and Coyote Moon Vineyards‘ “Brianna” on their Best of Class awards in Vignoles and Other White wine categories respectively.

More New York State winners from these competitions can be found online here.

Upcoming Winery & Wine Trail Events
Cayuga Lake Wine Trail Events in February
16th Annual Mardi Gras: Get a taste for Bourbon Street, but with wine! Collect your beads as you travel the Trail sampling food and wine pairings. Compete in a scavenger hunt for a chance to win a mixed case of CLWT wine! Chances to win prizes at each location. Saturday 10-5pm, all 14 wineries are participating. Each ticket is good for the whole weekend, to visit each winery once. Single tickets are $35 plus tax.
Keuka Lake Wine Trail Events in February
Celebrate Valentine’s season and Presidents’ Day weekend with the perfect pair – wine and cheese! Enjoy a wide range of creative and savory food samples prepared lovingly by our wineries with a variety of spectacular cheeses, and paired beautifully with the great wines of Keuka Lake. Pricing options range from $14 to $25.
Seneca Lake Wine Trail Events in February
Co-sponsored by the Elmira Corning Regional Airport, participating wineries will be preparing food from an amazing variety of different nations, with many of them decorating their tasting rooms in the same theme, pairing up samples of their dishes with their delicious wines. Regular tickets purchased in advance are $40 per person. Click here for more information on Savory World of Seneca Weekend and to purchase tickets.

Thought for the Day…
Next Post: The Shaman of the Sea – Reid Stowe, the World’s Greatest Long Distance Sailor. Are you a sailor, let us know?