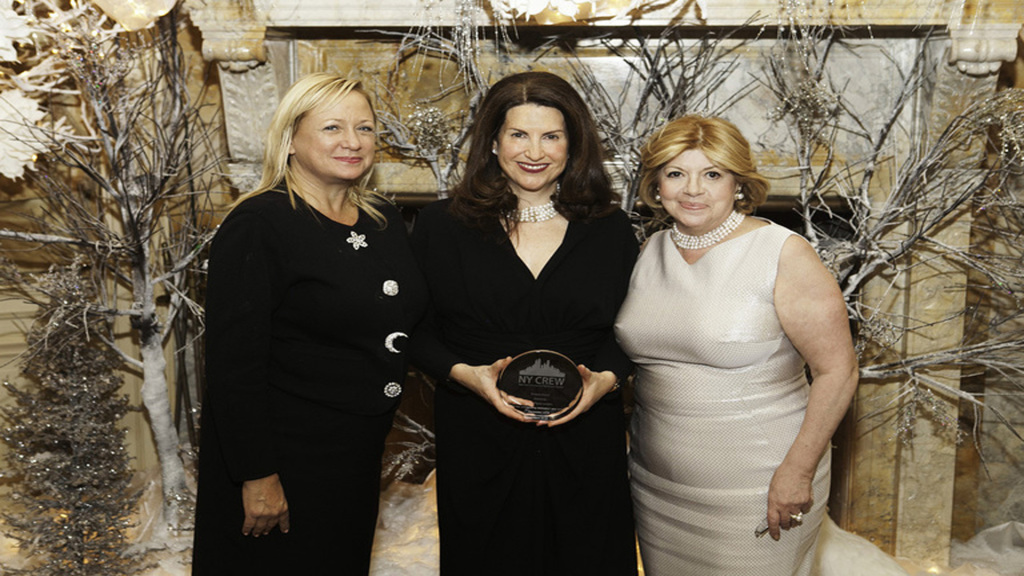 Queens of the Empire: A highlight of the Annual Gala held by The New York chapter of Commercial Real Estate Women’s Network (NYCREW) was the presentation of the Empire Award to Leila Larijani(center), Senior Vice President – Wealth Management of UBS Financial Services, a sponsor of the organiztion’s annual Global Trends panel, and a member of numerous committees. This singular honor,given for outstanding dedication and service to the chapter and the industry, was founded and sponsored by NYCREW and CREW Network board member Faith Hope Consolo (right), Chairman of Douglas Elliman’s Retail Group. Ms. Consolo also created the Founders Award, a comparable honor from the Association of Real Estate Women (AREW), during her term as President. The gala was the last for NYCREW, which will merge with AREW to form CREW New York in 2015, but the newly combined organization will present both the Empire and Founders Awards next year to recognize the achievements of its members. Pictured, from left: NYCREW past President Karen Dome, Senior Associate at Marcus & Millichap, who presented the award; Larijani; Consolo.

ABOUT NYCREW Network
NYCREW Network, the original New York area chapter of CREW (Commercial Real Estate Women, a national organization of over 9,000 commercial real estate professionals), was founded in 2001 to advance the success of women in commercial real estate through opportunity, influence andpower. Since then, NYCREW has provided its members with the skills and opportunities to achieve success in commercial real estate, encouraging doing business together in collaboration rather than competition. Comprised of senior and rising professionals from a broad range of disciplines within the commercial real estate industry, such as: financial services; asset and property management; developers; owners and operators; investment and property brokerage firms; and appraisers, accountants, architects, attorneys and other consultants, NYCREW members are also active in a wide range of industry segments, such as hospitality, industrial, office, retail, mixed use, transportation, etc.www.nycrew.org