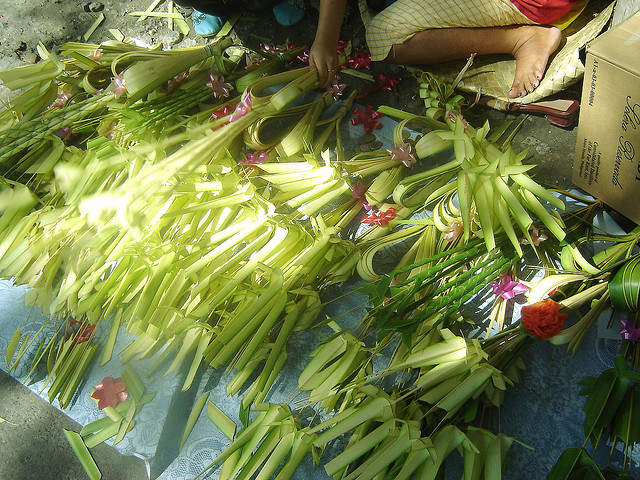 Palm Sunday is a Christian moveable feast that falls on the Sunday before Easter. The feast commemorates Jesus’ triumphal entry into Jerusalem, an event mentioned in all four canonical Gospels.

In many Christian churches, Palm Sunday includes a procession of the assembled worshipers carrying palms, representing the palm branches the crowd scattered in front of Jesus as he rode into Jerusalem. The difficulty of procuring palms in unfavorable climates led to their substitution with branches of native trees, including box, yew, willow, and olive. The Sunday was often designated by the names of these trees, as in Yew Sunday, or by the general term Branch Sunday.

Palm Sunday, or the “Entry of the Lord into Jerusalem,” as it is often called in some Orthodox Churches, is one of the Twelve Great Feasts of the liturgical year. The day before Palm Sunday, Lazarus Saturday, believers often prepare palm fronds by knotting them into crosses in preparation for the procession on Sunday. The hangings and vestments in the church are changed to a festive color – gold in the Greek tradition and green in the Slavic tradition.

The Troparion of the Feast indicates the resurrection of Lazarus is a prefiguration of Jesus’ own Resurrection:

O Christ our God
When Thou didst raise Lazarus from the dead before Thy Passion,
Thou didst confirm the resurrection of the universe.
Wherefore, we like children,
carry the banner of triumph and victory,
and we cry to Thee, O Conqueror of love,
Hosanna in the highest!
Blessed is He that cometh
in the Name of the Lord.

In the Russian Orthodox Church, Ukrainian Orthodox Church, Ukrainian Catholic Church, Ruthenian Catholic Church, Polish, Bavarian and Austrian Roman Catholics, and various other Eastern European peoples, the custom developed of using pussy willow instead of palm fronds because the latter are not readily available that far north. There is no canonical requirement as to what kind of branches must be used, so some Orthodox believers use olive branches. Whatever the kind, these branches are blessed and distributed together with candles either during the All-Night Vigil on the Eve of the Feast (Saturday night), or before the Divine Liturgy on Sunday morning. The Great Entrance of the Divine Liturgy commemorates the “Entry of the Lord into Jerusalem”, so the meaningfulness of this moment is punctuated on Palm Sunday as everyone stands, holding their branches and lit candles. The faithful take these branches and candles home with them after the service, and keep them in their icon corner as an evloghia (blessing).

In Russia, donkey walk processions took place in different cities, but most importantly in Novgorod and, since 1558 until 1693, in Moscow. It was prominently featured in testimonies by foreign witnesses and mentioned in contemporary Western maps of the city. The Patriarch of Moscow, representing Christ, rode on a “donkey” (actually a horse draped in white cloth); the Tsar of Russia humbly led the procession on foot. Originally, Moscow processions began inside the Kremlin and terminated at Trinity Church, now known as Saint Basil’s Cathedral, but in 1658 Patriarch Nikon reversed the order of procession. Peter I, as a part of his nationalisation of the church, terminated the custom; it has been occasionally recreated in the 21st century.

In Oriental Orthodox churches, palm fronds are distributed at the front of the church at the sanctuary steps, in India the sanctuary itself having been strewn with marigolds, and the congregation proceeds through and outside the church.
Western Christianity

In ancient times, palm branches symbolized goodness and victory. They were often depicted on coins and important buildings. Solomon had palm branches carved into the walls and doors of the temple (1 Kings 6:29). Again at the end of the Bible, people from every nation raise palm branches to honor Jesus (Revelation 7:9).

Palm Sunday commemorates the entrance of Jesus into Jerusalem (Matthew 21:1-9), when palm branches were placed in his path, before his arrest on Holy Thursday and his crucifixion on Good Friday. It thus marks the beginning of Holy Week, the final week of Lent.

In the Roman Catholic Church, as well as among many Anglican and Lutheran congregations, palm fronds (or in colder climates some kind of substitutes) are blessed with an aspergillum outside the church building (or in cold climates in the narthex when Easter falls early in the year). A solemn procession also takes place. It may include the normal liturgical procession of clergy and acolytes, the parish choir, or the entire congregation.

In the Catholic Church, this feast now coincides with that of Passion Sunday, which is the focus of the Mass which follows the service of the blessing of palms.
Blessing of palms outside an Episcopal Church in the United States.

The palms are saved in many churches to be burned the following year as the source of ashes used in Ash Wednesday services. The Catholic Church considers the blessed palms to be sacramentals. The vestments for the day are deep scarlet red, the color of blood, indicating the supreme redemptive sacrifice Christ was entering the city to fulfill: his Passion and Resurrection in Jerusalem.

In the Episcopal and many other Anglican churches and in Lutheran churches, as well, the day is nowadays officially called “The Sunday of the Passion: Palm Sunday”; in practice, though, it is usually termed “Palm Sunday” as in the 1928 American Book of Common Prayer and in earlier Lutheran liturgies and calendars, to avoid undue confusion with the penultimate Sunday of Lent in the traditional calendar, which was “Passion Sunday”.

In the Church of Pakistan (a member of the Anglican Communion) on Palm Sunday, the faithful carry palm branches into the church, as they sing Psalm 24.

In many Protestant churches, children are given palms, and then walk in procession around the inside of the church while the adults remain seated.