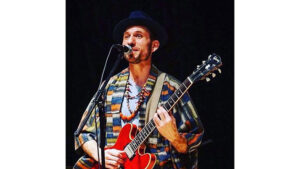 “Paul Josephs; composer, performer, wordsmith, singer, guitarist, New York native, educator, environmental activist, blues man. Been playing professionally since 16; hit the scene with these older blues musicians playing all around NYC and also ran my own night on Tuesdays opening up for the comedy show at the NY Improv. Since then have had the good fortune to have toured and been hired for session work with a handful of wonderful musicians; Idris Muhammad, Dr. Lonnie Smith, Pharoahe Monch, Jean Grae, Beyonce, Citizen Cope, Maceo Parker, Aurthur Blythe, Kenwood Denard, Rodney Jones, The Roots, Nikki Glaspie, Alice Smith etc.… have released two of my own albums; the second one, Strong World, has had me touring in Germany, Holland, Switzerland, England, and France.

Grew up on the Hudson River, the native people of this land called it Mahicanituk or “river that flows both ways,” and named themselves after it as “people of the river that flows both ways,” Muhheakunn (the Dutch used Mohican.) The songs and spirit are connected with this river; as is true for many musicians and artist alive now and many greats that came before including John Coltrane and Thelonius Monk.

The music is performed with different ensembles often with either a trio of guitar, bass and drums or a solo concert featuring just guitar or piano and voice; and also at times the music is presented in one-man concerts featuring live-looping. Sometimes the space on stage contracts significantly as the group expands into a septet with trumpet, trombone, sax, and keys or another guitar.

I produce music of all kinds with all different types of people and conduct production and song writing workshops with students all over new york city and the world.

On the road with purpose and leaving a trail of raised spirits in the wake.