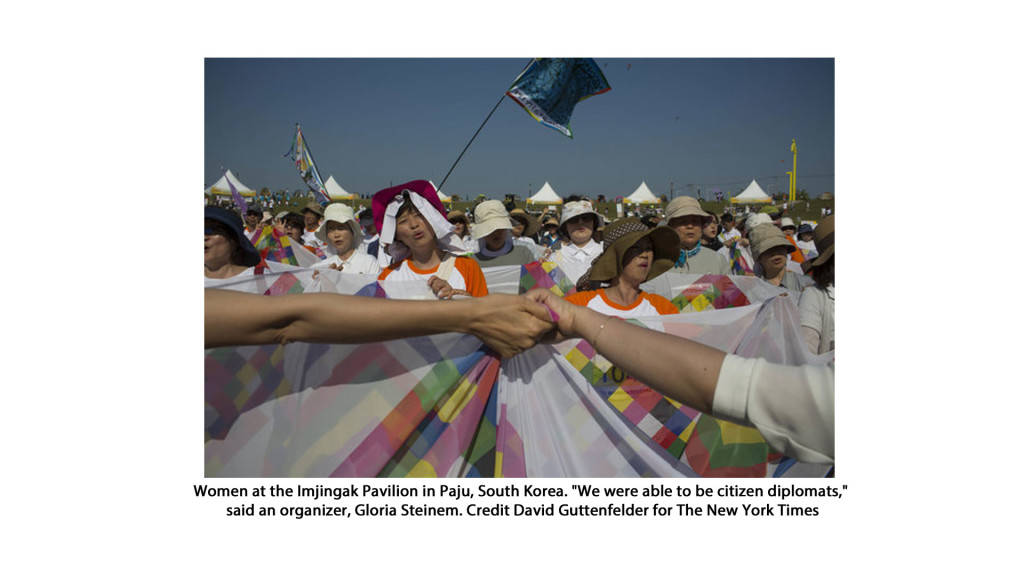 http://www.nytimes.com/2015/05/25/world/asia/peace-activists-cross-demilitarized-zone-separating-koreas.html?_r=0  Thank you NY Times, you are one of the greatest papers in the world that I am proud to read almost everyday for over 50 years. Paul
PAJU, South Korea — A group of 30 female peace activists, including the feminist leader Gloria Steinem and two Nobel Peace Prize laureates, crossed the demilitarized zone from North Korea to South Korea on Sunday, calling for an end to the Korean War, whose unresolved hostility has been symbolized by the heavily armed border for six decades.

It was rare for the two rival Korean governments to agree to allow a group of peace activists to pass through the border area, known as the DMZ.

Yet some of the symbolism the activists had hoped to generate with their Women Cross DMZ campaign was lost when South Korea denied them permission to walk through Panmunjom, a border village where a truce was signed in 1953 to halt, though not formally end, the conflict, leaving the divided Korea technically in a state of war.

Activists Say Both North Korea and South Korea Approve Women’s Peace WalkAPRIL 24, 2015
Instead, the women, who had traveled from Pyongyang, the North Korean capital, were detoured to a checkpoint southwest of Panmunjom. There, convoys of South Korean trucks go to and from a joint industrial park in the North Korean town of Kaesong. The women, carrying banners, were again barred from walking across the border, and had to cross by bus.

Still, they considered the endeavor a success. “We have accomplished what no one said can be done, which is to be a trip for peace, for reconciliation, for human rights and a trip to which both governments agreed,” Ms. Steinem told the South Korean news media. “We were able to be citizen diplomats.”

The women — including the Nobel Peace laureates Mairead Maguire from Northern Ireland and Leymah Gbowee from Liberia — arrived in Pyongyang on Tuesday for the march, which they hoped would highlight the need to build peace and set the stage for Korean reunification by formally ending the war with a permanent peace treaty.

The crossing, however, took place amid tension over the North’s pursuit of nuclear weapons and ballistic missiles, and over its human rights record.

Just two days before the women’s arrival in Pyongyang, the North’s state-run media hurled one of its harshest — and most sexist — screeds against President Park Geun-hye of South Korea, calling her “a fork-tongued viper” and one “not worth calling a woman” because “she has never given birth to a baby.” Last week, Secretary of State John Kerry said the North Korean government, led by Kim Jong-un, was “one of the most egregious examples of reckless disregard for human rights.”

Some rights activists in the United States and South Korea opposed the women’s trip, saying that it would be used as propaganda by North Korea. They urged the peace activists to call on the North to dismantle political prison camps and end human rights abuses.

When the activists marched in Pyongyang on Saturday, North Korean women in colorful traditional dresses lined a boulevard waving red and pink paper flowers, according to North Korean television footage.

One of the roadside signs said “Let us reunify the divided country as soon as possible!” On the other side of the border on Sunday, hundreds of South Korean activists welcomed the women who crossed into the South Korean city of Paju, north of Seoul. Not far away, however, hundreds of conservative South Koreans, including defectors from the North, also rallied, accusing the activists of “flattering Kim Jong-un” and promoting a “fake peace.”

Continue reading the main story
“Go back to the North!” they chanted.

The conservative protesters cited reports in the state-run North Korean news media that quoted some of the visitors as praising North Korean leaders. In its reports about the activists’ meetings with North Korean women in Pyongyang, the North’s Korean Central News Agency also cited “speakers” who it said called the United States “a kingdom of terrorism and a kingpin of human rights abuses.”

The conservatives said those reports proved that the activists had been used as propaganda tools by the North. But organizers of the trip said that none of the visiting women had uttered any of the remarks that were reported in the North Korean media. The organizers stressed that their trip had been aimed at easing the mistrust and hostility that not only divided the two Koreas but also people in the South.

Several South Korean activists have in the past defied the ban on visiting North Korea without government permission and traveled to Pyongyang to promote reconciliation. When they returned home to face arrest, North Korea gave them a rousing send-off at Panmunjom. South Korean officials did not want Ms. Steinem and her party to cross Panmunjom partly because they did not want North Korea to use the trip for similar propaganda.