Saluting a Soldier and Olympic Gold Medalist What is it like to Bring Home the GOLD for your Country AND the U.S. Army Reserve?

You are here: Home / Good News To Go / Saluting a Soldier and Olympic Gold Medalist What is it like to Bring Home the GOLD for your Country AND the U.S. Army Reserve?

Listen to “Saluting a Soldier and Olympic Gold Medalist What is it like to Bring Home the GOLD for your…” on Spreaker. 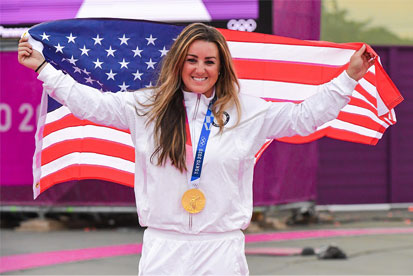 This summer U.S. Army Reserve 1st Lt. Amber English claimed an Olympic gold medal for skeet shooting in Tokyo.
The first-time Olympian set a new Olympic skeet shooting record with 56 hits defeating Diana Bacosi of Italy, the 2016 Olympic champion.
English exercised resilience to overcome the adversities she encountered during her journey to the 2020 Olympics. In 2016, she lost her father, and in 2012 and 2016 she did not make the U.S. Olympic Team. Winning the gold this year was about more than sheer skill – it was a testament to perseverance and what one can achieve when she doesn’t give up on her goals.
Now that her medal-winning performance is behind her, 1st Lt. English is stateside again, settling back into her pre-Olympics role as a Logistics Officer in the U.S. Army Reserve.
Join 1st Lt. English to learn about her Olympic journey and the unique, double honor of representing Team USA and the U.S. Army Reserve on the world stage. Find out why she chose service in the U.S. Army Reserve, and what it taught her about perseverance, team work and achieving
Interview courtesy: U.S. Army Reserve @AmberEnglish