You are here: Home / Public Service / Events / Shakespeare’s The Tempest A Production by THE DRILLING COMPANY in Bryant Park with new music by NATALIE SMITH and arrangements by MICHAEL CHORNEY (of Hadestown) 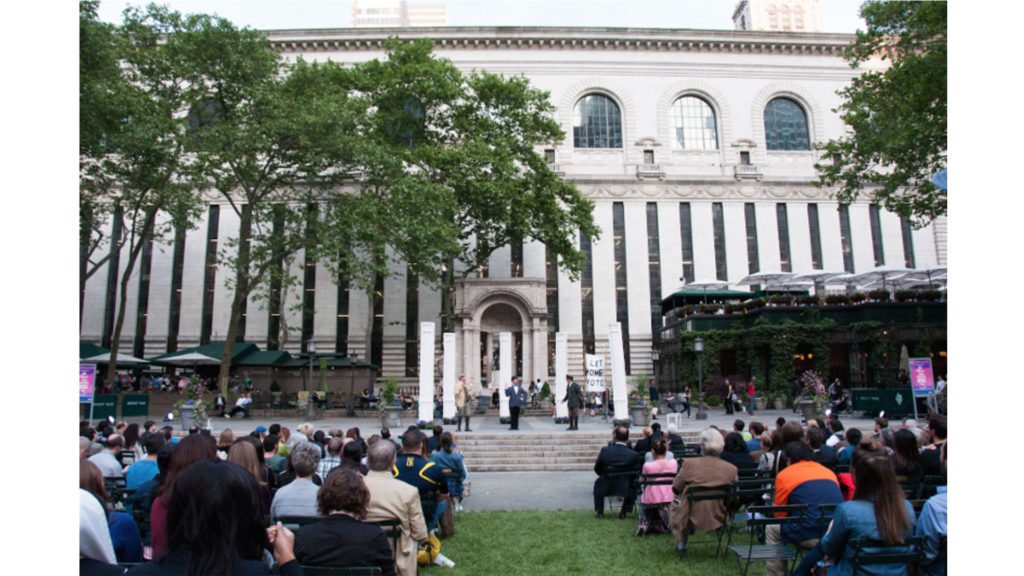 When providence and sorcery land a treacherous brother and a king on an enchanted island, the exiled Duke Prospero and his daughter Miranda get a second chance to reclaim their rightful status. In this production of Shakespeare’s beloved farewell to the stage, righteous anger gives way to love and forgiveness. This free run of shows will be set in the famed Bryant Park, easily accessible via public transportation and located in the heart of Manhattan. Take a break from the everyday to see the magic of Shakespeare in the park with no lines, no waiting and plenty of space to stretch out and enjoy the performance from veteran Shakespearean acting company The Drilling Company, long known for their Shakespeare in the Parking Lot performances.

Lukas Raphael, long-time member of The Drilling Company and veteran of the Bryant Park Stage, marks his directing debut for Bryant Park Shakespeare. This Tempest will feature newly composed music by singer/songwriter/actress Natalie Smith (who will also be playing the part of Ariel), arranged by award-winning composer Michael Chorney (of the musical Hadestown), with costume design by Sofia Piccolo.
Broadway’s Roger Rathburn (from the Tony-nominated No No Nanette), who will play the witty and powerful Prospero, is surrounded by a sterling retinue of Drilling Company veterans: Jarrod Bates and Andrew Gombas play the roles of the comedic Trinculo and Stephano, while Mary Linehan and Wesley Zurick delight as the Lovers, Miranda and Ferdinand. Eric Paterani (Caliban), Jack Sochet (Alonso), Michael Bernstein (Antonio), Bryce Dutton (Sebastian), Bob Acaro (Gonzalo) and Zac Guttman (Adrian) round out the cast.

Bryant Park Corporation (BPC), a private not-for-profit company, was founded in 1980 to renovate, finance and operate Bryant Park in New York City. BPC is funded by income from events, concessions and corporate sponsors, as well as an assessment on neighboring properties, and does not accept government or philanthropic monies. In addition to providing security and sanitation services and tending the park’s lush lawn and seasonal garden displays, BPC provides public amenities and activities, including movable chairs and tables, cafe umbrellas, restaurants, food kiosks, world-class restrooms, and a wide range of free events throughout the year. The Midtown Manhattan park is visited by more than six million people each year and is one of the busiest public spaces in the world. BPC’s website, bryantpark.org, is available for more detailed information and a schedule of upcoming events.

Drilling Company Theatrical Productions has produced Shakespeare plays and new plays for over two decades. Drilling Company Shakespeare is a highly anticipated annual summer institution that includes Shakespeare in the Parking Lot, now entering its 23rd season on the Lower East Side, and for the last four years, partnering with Bryant Park, where over 35,000 people have attended its productions. The company has been featured in media publications including The New York Times, CBS, MSNBC, The London Times, Huffington Post, and many others, and is the second largest producer for free Shakespeare in New York City. Originally dedicated to the development and production of new works by emerging American playwrights, the Company has commissioned and produced over a dozen world premieres, notably the original production of C. Denby Swanson’s Off Broadway hit The Norwegians, and in 2018 is producing Brian Dykstra’s Education at 59E59 Theaters.

TNT’s Will is the 2017 season sponsor of Bryant Park Presents Shakespeare. The new television series portrays a contemporary version of Shakespeare’s life, played to a modern soundtrack that exposes all his recklessness, lustful temptations and brilliance. Check out the television premiere of the series July 10 on TNT.

Location and Directions:
Bryant Park is situated behind the New York Public Library in midtown Manhattan, between 40th and 42nd Streets & Fifth and Sixth Avenues. Take the B, D, F, or M train to 42nd Street/Bryant Park; or, take the 7 train to 5th Avenue.

THE 13TH ANNUAL A HAMPTONS HAPPENING HONORS DIVERSE INDUSTRY LEADERS TO BENEFIT THE SAMUEL WAXMAN CANCER RESEARCH FOUNDATION
Next Post: Good News Broadcast was established in 1998, we created our Happy Face Logo to bring joy to the World! We share our animations with you!