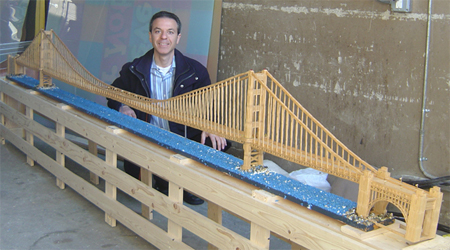 Steven J. Backman, a San Francisco native, has been creating toothpick art for nearly 40 years. What began as an elementary school project has become a passion for creating one-of-a-kind masterpieces.

Steven recently restored a replica of the Golden Gate Bridge he made from 30,000 toothpicks and glue.  Measuring thirteen feet in length, the sculpture will be on view at the Hyatt Regency San Francisco from April 9th thru May 30th, 2012.  May also marks the 75th Anniversary celebration of this historic landmark.

Ripley’s Believe It or Not! is making this incredible toothpick marvel available for public display at the Hyatt Regency San Francisco.  The hotel is located at 5 Embarcadero Center, San Francisco, CA  94111.

During a recent interview, Steven said that he is very happy his work of art is back in San Francisco to mark such a monumental celebration for the Golden Gate Bridge.  It will be on permanent display at the Ripley’s Believe It or Not! Museum at Fisherman’s Wharf in June.

Several of Steven’s other well known works can be seen by visiting www.toothpickart.com

Steven’s passion for toothpicks has led him to create other amazing sculptures, including a miniature replica of the White House he created from a single toothpick.  Steven is continuing his legacy by creating a new series of toothpick art.

Previous Post: « CELEBS GET “WHITE HOT” IN THE HAMPTONS TO SAVE THE MUSIC
Next Post: Iconic Actor Tom Cruise To Receive Friars’ Highest Award At June Celebration »