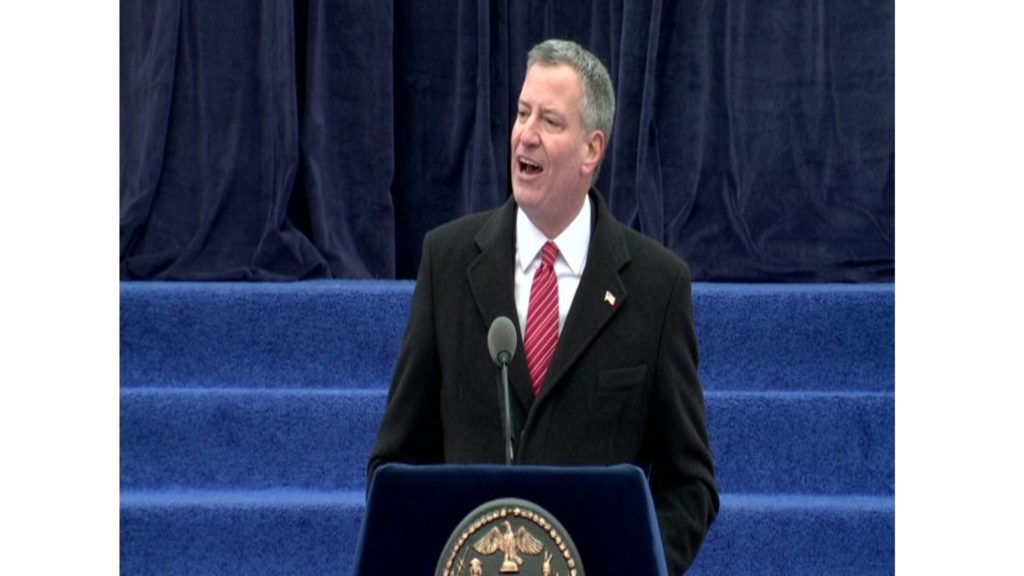 Bill de Blasio (born Warren Wilhelm Jr.; May 8, 1961) is an American politician who is the 109th mayor of New York City. From 2010 to 2013, he held the citywide office of New York City public advocate. He formerly was a New York City Council member, representing the 39th district in Brooklyn, which contains Borough Park, Carroll Gardens, Cobble Hill, Gowanus, Kensington, Park Slope, and Windsor Terrace. De Blasio, the Democratic Party nominee for mayor of New York City in the 2013 election, defeated Republican Joe Lhota with more than 73 percent of the vote. De Blasio is the first Democratic mayor of the city since David Dinkins, from 1990 to 1993.

He ran for mayor promising to end stop and frisk and improve relations between the New York City Police Department and many New Yorkers, especially African Americans and Hispanics. His tenure has seen a spike in anti-police protests and disaffection with law enforcement, and he has been charged by the NYPD union with putting the interests of protesters above those of the police. He initiated new de-escalation training for officers, reduced prosecutions for cannabis possession, and oversaw the beginning of body cameras worn by police. De Blasio approved a $41 million settlement for the five men whose convictions in the 1989 Central Park jogger case were overturned and ended a post-9/11 surveillance program to monitor Muslim residents in the city.

De Blasio ran for mayor touting himself as a populist concerned with the stark level of economic inequality in New York City, which he called the “tale of two cities”. Towards that end, he passed free universal Pre-K in the city, although his effort to start a millionaire tax was rejected by New York state governor Andrew Cuomo. He also advocated for the Rent Act of 2015, which created an unprecedented rent freeze citywide for rent-stabilized apartments. De Blasio proposed a multi-year plan to boost the supply of affordable housing in the city, and will seek approval by the City Council in early 2016. His plan would allow developers to gain favorable zoning ordinances and build taller buildings in exchange for constructing affordable units.